So much for our media, which has been telling us — contrary to the actual law as I explained previously— that Obama could not obtain original documents of his own birth records.

Succumbing to the realization — which I also predicted — that the “Birther” strategy was failing, the White House has purported to release this morning a “long form” birth certificate.  It looks to me like a 1961 version of the short form Certificate of Live Birth.  Here’s the link to the White House page and the document, an image of which is below.

The story is not over, I’m sure, but this will help Obama, since the document was issued just days after his birth.

The ease with which the White House obtained the documents demonstrates the rank idiocy of the mainstream media, which has been feeding us a steady stream of excuses as to why Obama could not obtain the document. 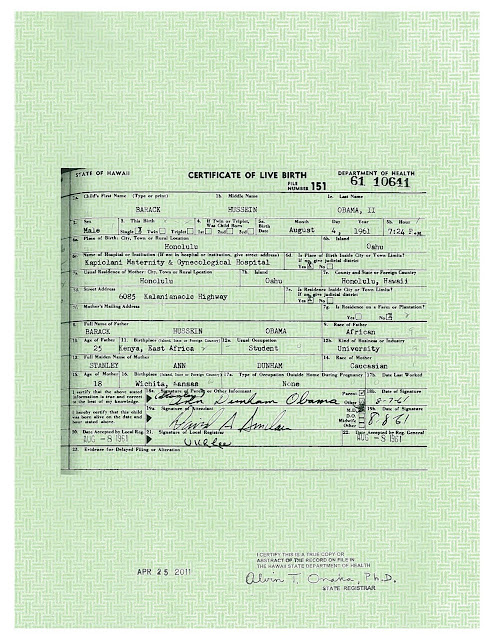 Update:  For some reason people have seized on the words “[i]t looks to me like a 1961 version of the short form” as a reflection of skepticism on my part.  That was not my intent.  I merely wanted to point out that the document doesn’t look all that different than the document previously released, although it does have some additional information.

The document goes a long way, if not completely, towards quieting the issue. But the ease with which Obama was able to get the document leads one to wonder why he resisted so long. It was only when the Obama campaign saw the issue developing into a strategic nightmare that Obama took the simple and easy step of releasing an original document.

This also raises issues as to why the media repeatedly has told us that Obama was not able to obtain original documentation when clearly he was able to do so.

While the Obama campaign certainly will spin this as some sort of victory, it came at a high price to Obama in the polls.

If by Rickrolled, you mean he put out a fraudulent birth certificate as a joke of some kind, then maybe.
http://theothermccain.com/2011/04/27/dont-touch-my-birth-certificate-junk/
See the comments Tialoc. He is a fraud, and this release took about 8 hours for a HUGE GLARING problem with it to crop up.

Put the Birth document released by the White house today (the pdf released directly from the White House)into Adobe Illustrator… 22 edits were made. A clean scan should have zero !!!!! ..What a bunch of amateurs. Never hold up in Court as unedited…And where is the official seal???

Curious to how Trump will eventually respond to this inept forgery…

UKLLee? For real? That's who attended his birth?