For almost the entire two and one-half years I’ve been blogging I’ve had to put up with Paul Krugman accusing Republicans, conservatives and Tea Party supporters of inciting violence through heated rhetoric over policy differences, particularly Obamacare.

I’ve even started a tag for Paul Krugman, which prior today had 24 entries.

You know that Republicans will yell about the evils of partisanship whenever anyone tries to make a connection between the rhetoric of Beck, Limbaugh, etc. and the violence I fear we’re going to see in the months and years ahead. But violent acts are what happen when you create a climate of hate. And it’s long past time for the GOP’s leaders to take a stand against the hate-mongers.

Krugman shut down the comments to that column, writing in an update:

I’m going to take down comments on this one; they would need a lot of moderating, because the crazies are coming out in force, and it’s all too likely to turn into a flame war.

For Krugman, making accusations that right-wing rhetoric is responsible for violence without any proof is nothing new.  Among other things, Krugman also falsely blamed the Holocaust Museum shooting on conservatives.

So imagine my surprise to see that Krugman penned a column titled Let’s Not Be Civil:

Sorry to be cynical, but right now “bipartisan” is usually code for assembling some conservative Democrats and ultraconservative Republicans — all of them with close ties to the wealthy, and many who are wealthy themselves — and having them proclaim that low taxes on high incomes and drastic cuts in social insurance are the only possible solution.

This would be a corrupt, undemocratic way to make decisions about the shape of our society even if those involved really were wise men with a deep grasp of the issues. It’s much worse when many of those at the table are the sort of people who solicit and believe the kind of policy analyses that the Heritage Foundation supplies.

So let’s not be civil. Instead, let’s have a frank discussion of our differences. In particular, if Democrats believe that Republicans are talking cruel nonsense, they should say so — and take their case to the voters.

That’s exactly what Republicans, and conservatives, and Tea Party supporters have been doing the past two years in criticizing the substance of Obamacare and Obama’s policies, which earned Krugman’s ire and accusations of hate-speech and inciting violence.

But when Obama accused Paul Ryan not merely of having a supposedly flawed plan, but of wanting senior citizens, the disabled and the sick to suffer, that’s okay with Krugman.  Dissent all of the sudden is patriotic.

I could go on and on, but the NY Times new firewall has blocked me when I tried to pull up additional Krugman columns: 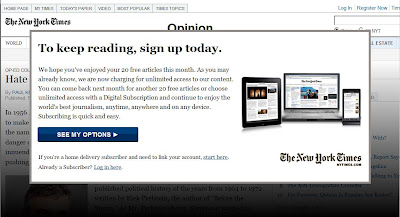 Now I know the real reason for the paywall, to prevent those of us who do not want to feed the beast from getting the evidence to call Paul Krugman what he is, a complete and total phony, a hypocrite of the worst type, a has-been using his Nobel Prize as an excuse to call others names to cover up his lack of evidence.

Thank goodness Paul Krugman has taken off the mask, and it’s now patriotic to call Krugman a [email protected]%$#% hypocrite.

Tlaloc totally missed the point here. Krugman was whining about civility. Now he's asking people to be uncivil. Forget which politician was saying what, the guy has done a total 180.

In other words, this has nothing to do with what ANYONE else said/is saying and only deals with Krugman. 3 months ago, incivility was the worst thing to happen to this Republic since the Civil War and quite possibly the bane of human existence according to Krugman. Today, well it's quite alright to be uncivil. Get it?