Think Progress, the Democratic messaging website run by John Podesta of the Center for American Progress, has been a frequent focus here for its outlandish race-card playing and other antics.

This week Think Progress hit a new low, when it ran a blog post mocking the politics of southern states which were hit by tornadoes, using the devastation as an excuse both to push a global warming agenda and to take a swipe at the conservative politics of the region.

It was in many ways Think Progress’ Wonkette moment.

Here is a screen shot of the original post (this somehow has disappeared from Google cache, but I had the screenshot saved): 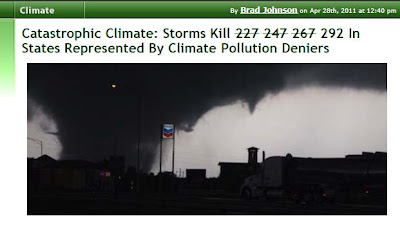 When an internet firestorm erupted, the post title was toned down a bit eliminating the rolling body count: 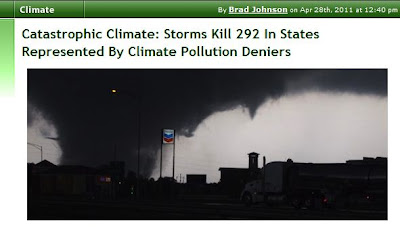 To make sure no one missed it, the post was run again in the evening under the “Healthy Communities” section of Think Progress: 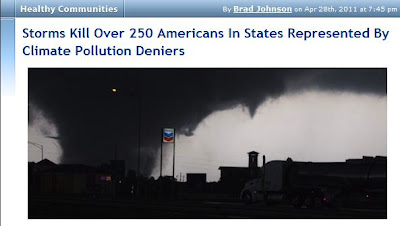 Putting aside the offensive and crass political swipe, the attempt to draw a connection between the tornadoes and climate change simply was false:

US meteorologists warned Thursday it would be a mistake to blame climate change for a seeming increase in tornadoes in the wake of deadly storms that have ripped through the US south.

“If you look at the past 60 years of data, the number of tornadoes is increasing significantly, but it’s agreed upon by the tornado community that it’s not a real increase,” said Grady Dixon, assistant professor of meteorology and climatology at Mississippi State University.
“It’s having to do with better (weather tracking) technology, more population, the fact that the population is better educated and more aware. So we’re seeing them more often,” Dixon said.

But he said it would be “a terrible mistake” to relate the up-tick to climate change.

Here is a chart of tornado history in the U.S. (via Watts Up With That), showing that even with better detection and tracking, the number of strong tornadoes is not really increasing:

Lacking a scientific basis for the crude political swipe, Think Progress did what Wonkette originally did, double-down.

The author of the original post ran a third post the next day trying to justify his original posts, and Think Progress’ lead blogger, Matthew Yglesias (one of the first bloggers to make a connection between the Sarah Palin electoral map and the Gabriell Giffords shooting), came to his defense in response to a critical post by Tabitha Hale.

The outrage at the Think Progress post will not last, unlike the outrage directed at Wonkette.  In part, it’s because there is no one to whom to complain.  Think Progress, flush with cash from big Democratic donors, has no advertisers.

But in part it’s because we expect so much less from Think Progress than from Wonkette.

(As an aside, notice how the author uses the term “climate pollution.”  Is that the new verbiage?)

According to the chart, peak tornado activity over the last 55 years occurred around the time we were entering a new ice age–or so said the "experts".

Progressives using death and tragedy for political gain (a la the Tuscon massacre).

I expect nothing less from such insufferable phallic symbols.

OK, I know about Anthropogenic Global Warming. It morphed into Global Climate Change when it became apparent that the "warming" wasn't happening (as demonstrated by the famous phrase "hide the decline", from the Climategate emails).

But this "Climate Pollution" thing is a new one to me. I'm not sure how one COULD pollute "the climate". Pollute the ocean, yes; or the air; or groundwater. But… the CLIMATE? Hunh???