Game Over – Kloppenburg Loses to Prosser (and Truman)(and Palin)

Game Over – Kloppenburg Loses to Prosser (and Truman)(and Palin)

The results have just been posted in the Milwaukee County canvass, and nothing much changed from yesterday. AP reports Prosser picked up 11 more votes and is the winner.

The vote margin stands at 7316, a virtually insurmountable lead for a recount.  All the hanging chads in the world will not put Kloppenburg on the Supreme Court.

So I will make a plea taken from a concern troll who posted a comment here when it looked like Kloppenburg would win by 200 votes:

Prosser Kloppenburg is in a really tough spot here. A close election like this, you would pretty much have to file a recount.

But a recount would throw the impartiality and fairness of the Wisconsin court system into doubt, considering any judge in Wisconsin would have a personal interest in the case.

For the sake of the Wisconsin courts, Prosser Kloppenburg might have to swallow the narrow  loss.

Sarah Palin, who endorsed Prosser shortly before the election, will be attending a Tea Party rally in Madison Saturday.  Should be fun. 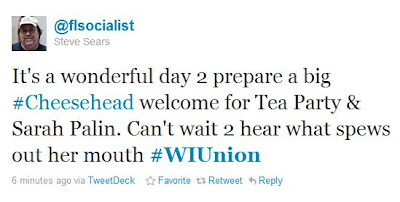 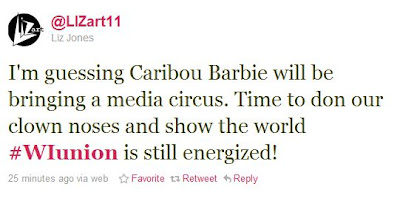 How great would it be if massive loudspeakers blasted this song as Palin took the stage in the belly of the beast? They’d tear their hair out.

“Today, the will of the electorate is clear with the last canvas now completed and Justice David Prosser reelected to another 10 year term to the Supreme Court. Justice Prosser extends his appreciation and respect to Joanne Kloppenburg and her spirited campaign.

With certified results in‐hand, Justice Prosser hopes that a shared respect for the judiciary allows the campaign to move to a positive conclusion.

Justice Prosser looks forward to thanking the voters of Wisconsin and is expected make a public address in the near‐future.”

Kloppenburg is pondering her options:

“Now that the statewide canvass is complete, our campaign will focus our decision making on whether to request a recount. By statute, we have three business days in which to make that decision. We will review the information available to us and carefully weigh the options. We will make an announcement concerning our decision no later than Wednesday, April 20, 2011.”

"The vote margin stands at 7316, a virtually insurmountable lead for a recount. All the hanging chads in the world will not put Kloppenburg on the Supreme Court."

1. With a sigh of relief, congratulations to David Prosser.

2. Heh. As far as this disillusioned former Palin supporter is concerned, the lyrics to Barracuda describe her–not to mention Obama, Huckabee, and Trump–pretty well.

"Hey, Tlaloc! You forgot that minor, inconvenient detail wherein you actually support your claim with this thing we call "evidence…""

Or are you just incapable of parsing such a simple statement for meaning?