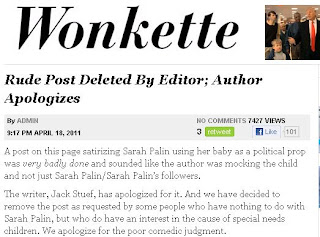 Wonkette has removed its latest post mocking Trig Palin, and instead posted a snide comment about how it really meant to mock Sarah Palin and her followers (emphasis mine):

“A post on this page satirizing Sarah Palin using her baby as a political prop was very badly done and sounded like the author was mocking the child and not just Sarah Palin/Sarah Palin’s followers.

The writer, Jack Stuef, has apologized for it. And we have decided to remove the post as requested by some people who have nothing to do with Sarah Palin, but who do have an interest in the cause of special needs children. We apologize for the poor comedic judgment.”

First, the point for me was not to get the post taken down, it was to hold Ken Layne, the owner of Wonkette, responsible for a long history of mocking Trig Palin at Wonkette.  The most recent post was not even the worst.  The other posts mocking Trig Palin, linked in my prior posts, remain active.  The writer this time, Jack Stuef, did nothing worse than other Wonkette writers and editors have done repeatedly.

Second, there is no true regret or acknowledgement by Layne.  Even in this belated removal, in reaction to advertisers pulling ads from Wonkette, Layne cannot hide his disdain.  The actions of Layne are nothing more than a post-conviction apology from someone who is upset only that he got caught.

Well, look on the bright side. At least they've seemed to finally move on from the whacked out "Trig's not Palin's son!!!!" conspiracy theory.

You're right that taking the post down is not a real victory. But at least some on the left pressured them and made a small difference for the next attack on the Palin children.

More importantly the issue was made prominent by the alternative media of bloggers, tweeters and talk radio. When decent people can shine a light on vile action and get some traction, that's a win.

Thank you for your ongoing coverage and condemnation of these attacks. You make a difference. I'm especially grateful because my brother had Down Syndrome.

Despicable excuse for a human being – and so blinded and permanently disfigured by latent Bush Derangement Syndrome which mutates into Palin Derangement Syndrome. All that hate didn't just evaporate the day Bush left office. It needed somewhere to go, and it latched onto her.

I'll cheer when Wonkette is a distant memory and Sarah Palin is elected to her second term.

I couldn't order pizza from Papa John's because I don't live in delivery range of any of their stores, but I did send them a nice e-mail and got back pretty much the same thing celestechristi did. 🙂