A few weeks ago, when the protests in Madison were still raging, it appeared that Justice David Prosser would go down to defeat by at least several percentage points, and the recall efforts seemed lopsided against Republican Senators.  I urged readers to get involved because we could not let Wisconsin June 2011 Become Massachusetts January 2010.

A funny thing happened on the way to the recall elections (which were anticipated for June, but more likely will be July or even August).

Whether Prosser wins by several thousand votes, or loses by a couple of hundred, the unions and Democrats gave it their best shot under near ideal circumstances, and they came up short of expectations.  The enthusiasm generated for the public employee union agenda in March will not be repeated this summer.

There are the makings of a Massachusetts miracle in Wisconsin, but the beneficiaries will be Republicans, not Democrats.

The efforts to recall state Senator Robert Wirch serves as a good example.  As I noted in a prior post, the organizers of the recall effort, who have operated on a shoestring budget with little outside help, obtained enough signatures as of a week ago to mandate a recall election.

I spoke this weekend with Dan Hunt of Recall Wirch, and the news has improved even more since then. Recall Wirch has almost no budget, but has attracted protesters (image right) to its recall petition drives who attempt to intimidate both the signature collectors and voters.  Recall Wirch, according to Hunt, has been reduced to trying to outfox the protesters by creating multiple locations to collect signatures and shifting efforts from location to location.  According to Hunt:

“For instance, they started by trying to inhibit signature collection at our drive-thrus. They would show up at our locations in force and dare people to stop. They would shout and wave protest signs. Our volunteers were intimidated to do anything to counter them because we were badly outnumbered. We stopped this one Saturday morning. We had planned to be in two places on that Saturday morning. They knew exactly where we would be and planned to be in both places in overwhelming force. We then made them think that we had abandoned one of the locations and would only be in one place. They showed up in major numbers at the place they thought we would be except we weren’t there either. We had sent our people to other locations without letting them know. They stayed for an hour and a half – forty to fifty people before they realized they had been fooled. That took the wind out of their sails for the rest of the campaign. After that we started thanking them for coming to our events because we realized they helped us by creating publicity and circus which actually drove our drive-thru numbers up.

There are countless ways we used their tactics against them. One was at our final drive-thru yesterday. We invited the demonstrators to come, thinking they really wouldn’t. But they did. About 15 showed up. We had doughnuts and coffee waiting for them which I, as the leader of the recall effort, served to them thanking them for being there and for all they had done to help us achieve our goal. We had prizes planned for them for the best T-shirt, best protest sign and dog biscuits for the 2 German Shepherd mix dogs that were at many of our events. All of this for reverse psychological effect. And it worked! While most of them refused my hospitality one of the union leaders came to me as he was leaving several hours later and thanked me for the professional organization I was running. He told me that he respected me as a leader and especially our recall volunteers for how they conducted themselves in this process.”

Despite the attempts to disrupt the petition drive, Recall Wirch has met with great success.  The recall petitions in the Wirch district are not due until April 25, but as of this weekend Recall Wirch had collected several thousand signatures more than necessary.

Equally important, there has been a noticeable improvement in morale and enthusiasm on the Republican side, according to Hunt, since the Supreme Court election.

But the Supreme Court election may be a harbinger of good things to come.  While it is hard to calculate precisely how the judicial election lined up with the district lines, Hunt estimates that Prosser lost the district by only about 1400 votes (and probably several hundred less).  And, according to Hunt, there were almost no get-out-the-vote efforts in the district for Republicans, and little organization.

Patrick Dorwin has looked at the recall districts, and views more Democrats at risk than Republicans.  As to Wirch, Dorwin noted:

The 22nd District covers Kenosha & Western Racine counties. This is a 50-50 district and can go either way.

That is pretty much the sentiment echoed by Hunt.  The recall effort against Wirch will be a close call, but is winnable.  That we even are talking about the reasonable possibility of a successful recall against someone like Wirch speaks volumes to the fact that all may not be as it seems in Wisconsin, and that Democrats are in a weaker position than the national media lets on.

I’ll go on record now.  There will be a Massachusetts miracle in Wisconsin.  And the beneficiary of that miracle will be Republicans, not Democrats.

(Images below of Recall Wirch petition collection this weekend courtesy of Dan Hunt.) 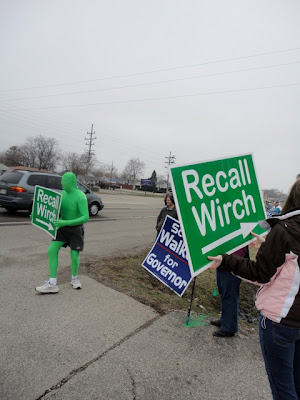 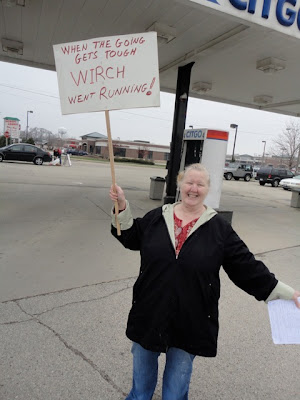 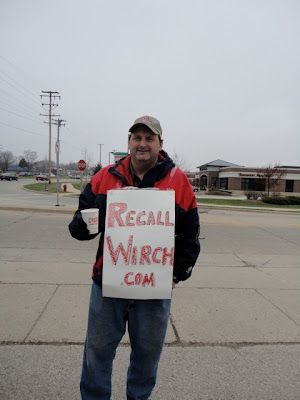 You are really on to something.

This telling article by Craig Gilbert in the April 10th Journal Sentinel logically supports the overall notion that there may very well be a Massachusetts miracle brewing in Wisconsin.

Entitled "Election turnout magnified divide in Wisconsin" the article indirectly demonstrates that voting patterns, even ones in which the result continues to be Dane County (Madison) versus the rest of the State, will inevitably result in a solid base of support for Republicans in proportional legislative districts far from the Madisoning crowd.

Note from the story how Governor Walker expressed his take on the Supreme Court judicial election:

. . .
"You have two very different worlds in this state. You've got a world driven by Madison, and a world driven by everybody else. . . .  What that tells me is just as you've seen in past elections, for president, for governor, for other offices, Wisconsin is not a red state. It's not a blue state. In many ways, it's a purple state. And it's divided on these issues."

The governor's argument, echoed by many Republicans, is that: The election did not reflect negatively on Walker, it merely confirmed the state's underlying 50/50 political makeup, and if there were any backlash against the governor and his policies, it was mainly a Madison phenomenon.
. . . .

While the author challenges that assessment a bit, he does observe that Dane County (Madison) went 73% to 27% for JoAnne Kloppenburg against Justice David Prosser, which required Prosser to make up the difference, and win by a total of 7% or more in the remainder of the State.

And he concedes that in the Democrat leaning City of Milwaukee, the judicial race resulted in a higher percentage of the vote going for Prosser than went for Walker in the gubernatorial race just last year:

. . .
Take Milwaukee, the state's other big Democratic county. It played a much different role than Dane in this election. It voted 57% to 43% for Kloppenburg over Prosser. Yet it was one of the few counties in the state where Prosser actually did better on Tuesday than Scott Walker did last fall. Prosser's share of the Milwaukee County vote was almost six points higher than Walker's was for governor in 2010.
. . . .

So, even in the event of a continued 50/50 split in Wisconsin, huge concentrations of progressive/liberal (progrel) voters in a few urban districts will give them sizeable victories in a few such urban districts. But they will be outpaced in the larger numbers of more suburban and exurban districts throughout the state.

That has to be at least one of the factors involved in the recall effort beginning to backfire on the progrels.

They were stupidly paying attention to their own Madisonalien "group-think" notions when they launched the effort — NOT to the real numbers out there in the rest of the State.

Boy . . . when the progrels finally figure it out they’re going to be really cheezed!

According to Meg Jones of the Journal Sentinel, a news conference has been scheduled for 2 pm by the Milwaukee county DA and the state Government Accountability Board on the results of a "significant investigation."

The state Government Accountability Board and Milwaukee County district attorney's office has scheduled a news conference Monday afternoon to discuss the results of a "significant investigation."

No details were given about the investigation.

The news conference is scheduled at 2 p.m. Monday at the Government Accountability Board office in Madison.

Waiting . . . according to Jessica Arp on Twitter some time ago, the presser is/was NOT about the Supreme Court election.

Perhaps it was about the 2:48 pm update to the story about the railroad executive charged with making campaign donations to Scott Walker's gubernatorial campaign, donations that exceeded allowable limits.

I'd like to hear somebody defend Kathy Nichalous' questionable, if not illegal, handling of votes in Waukesha Co. Her statements contradict the reality of Access software protocols, because imported data is "saved" automatically. And why would she wait until Thursday to announce her "human error" if, as she said, she knew another it on Wednesday? All of these questions and more NEED to be addressed in a very serious investigation. If votes are gamed on computer systems, our nation is in peril.

Could someone please clarify the Wisconsin recall process? Normally, a recall referendum is held, and only if the incumbent is recalled, is a second election held. Does Wisconsin roll these two steps into one?