A Map Which Should Make King & Spalding Shake

A Map Which Should Make King & Spalding Shake

King & Spalding dumped the House of Representatives as a client in DOMA litigation after coming under threatened protests and boycotts by groups opposed to DOMA.

A key aspect of the threats was that protesters not only would protest King & Spalding, but would go after other King & Spalding clients which had nothing to do with the DOMA case.  That, apparently, was too much for King & Spalding to bear, so it threw the House of Representatives overboard.

King & Spalding may have started something it cannot stop.

Ken Cuccinelli, the Attorney General of Virginia now has dumped King & Spalding as special counsel (it’s not clear in what), as reported by The Washington Examiner (via Powerline).  Here is the text of Cuccinelli’s letter, which reads in pertinent part (emphasis mine):

We seek to do business exclusively with law firms that do more than merely aim to perform the bottom of the barrel ethical obligations and do just enough on behalf of their clients to avoid trouble for themselves. We seek law firms that will actively protect our interests, even when that may be uncomfortable for their firms.

Virginia does not shy away from hiring outside counsel because they may have ongoing professional relationships with people or entities, or on behalf of causes, that I, or my office, or
Virginia as a whole, may not support. But, it is crucial for us to be able to trust and rely on the fact that our outside counsel will not desert Virginia due to pressure by an outside group or groups.

Virginia seeks firms of commitment, courage, strength and toughness, and unfortunately, what the world has learned of King & Spalding, is that your firm utterly lacks those qualities. As the official in Virginia responsible for ensuring that the legal needs of Virginia’s agencies are well met, I cannot leave UV AMC in the hands of a law firm of such weakness.

By way of example and explanation, King & Spalding’s role in representing terrorists is not objectionable to Virginia, because we understand the value of legal counsel, even for persons who hate this country and desire to do America and Americans harm. However, King & Spalding’s willingness to abandon a client, the United States House of Representatives, in connection with the lawsuit challenging the Defense of Marriage Act (“DOMA”), was such an obsequious act of weakness, that I feel compelled to end your legal association with Virginia so that there is no chance that one of my legal clients might be put in the embarrassing and difficult situation like the client you walked away from, the House of Representatives.

The failure of King & Spalding to maintain the kinds of minimum standards that Virginia would expect as a client of your firm is perhaps best demonstrated by the stunning dichotomy in the maintenance (or lack thereof) of its clients in my examples: it is acceptable to maintain client relationships with clients associated with terrorism, but not clients associated with marriage. And when it comes to dropping a client, it is a dichotomy that should not exist at any quality law firm.

Virginia simply cannot abide placing any reliance whatsoever on a law firm that makes decisions and acts in the manner of King & Spalding, and so we must terminate our relationship at this time. For future reference, your firm is not welcome to re-apply for special counsel status at any time as long as I am the Attorney General of Virginia.

King & Spalding, like many seemingly powerful large law firms, actually is extremely vulnerable once it becomes known that it will give in to political pressure.  What if pro-DOMA groups sought to bring political pressure to bear?

According to its website, King & Spalding represents a majority of states (including state agencies plus many local municipalities) in municipal bond work (emphasis mine):

King & Spalding has been nationally recognized in the field of public finance for close to 70 years. As the first firm in the southeastern United States to be listed in The Bond Buyer’s Municipal Marketplace as approved bond counsel, we have maintained a prominent position in the southeast and expanded our Public Finance Group to act as bond counsel throughout most of the U.S….

King & Spalding has represented issuers as bond counsel in thousands of public finance transactions throughout the country. As the oldest bond counsel firm in the State of Georgia, King & Spalding has been involved in borrowings by virtually every city and county in the state and consistently ranks first among the State’s top bond counsel. Nationally, we rank 25th among the top 100 bond counsel. Having acted as bond counsel in over 40 states, we have worked on a wide variety of financings for governmental projects as well as conduit issues for manufacturing facilities, airports, docks, ports, multi-family housing projects, sports facilities, hospitals, convention facilities and utility facilities.

Our practice also includes serving as underwriters’ counsel on tax-exempt borrowings. Our innovative strategies have attracted both regional and national underwriting firms and have made King & Spalding the top ranked underwriters’ firm in Georgia and one of the highest ranked firms in the southeast….

It just so happens that almost every state in the country has either DOMA constitutional amendments or DOMA legislation, including Georgia.  Here is a map: 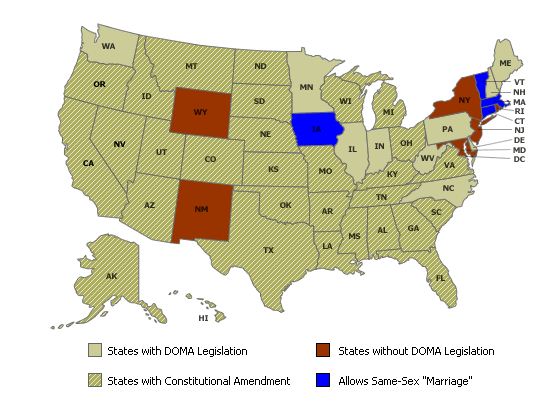 King & Spalding needs to go back to school, because it is on the verge of being schooled.

There’s a beauty and level of comfort in the ethical rules and principles which govern attorneys; the rules provide a compass which insulates attorneys from pressures to do the wrong thing, whether those pressures are brought by clients or outsiders.  I teach my students that the rules of ethics are not an enemy, they are an attorney’s best friend.

When attorneys put business convenience ahead of the attorney’s duty of loyalty to a client, there is no good outcome.

The moral of the King & Spalding story:

——————————————–
Related Posts:
Is There Now A Hostile Environment For Pro-Traditional Marriage Views At King & Spalding?
Day Without A Gay — A Bad Idea Ends Badly
I Thought We Were Supposed To Be Boycotting California

Wow, grand slam! Cuccinelli knocked it out of the park with that letter. I think I just learned more about the ethics of law and the purpose of the rule of law from this post, than from my entire lifetime of accumulated knowledge.

First rate post! "Political correctness" must really be a powerful driving force for some people, no? How else to explain these people painting themselves into a corner like this?

I’m sure I’m not alone in strongly sensing we have not heard the end of this one, not by a long shot!

It should never have come close to this situation for the firm, of course. But that lid must have really been steaming away for them to end up exposing themselves to this kind of vulnerability! I’d guess an ugly internal fight at the firm had to have been festering for quite a while, and no doubt lots of things were said that people would like very much to take back, given that this is becoming so public!

Also, you have to wonder if the firm was in any way internally conflicted as well, with perhaps one or more partners actually exacerbating the conflict by pushing the issue in a personal way? When a key partner very publicly walks like that, you know that there will be serious charges and counter-charges to come.

And, you also have to wonder if inevitably, questions will be raised about how much, if at all, the internal fight could have possibly compromised the client?

Finally, the old rule used to be you shouldn’t pick a fight with someone who buys in by the barrel, i.e., newspapers. But how about the "wisdom" of picking a fight with a client (Congress) who can issue subpoenas by the barrel?

No one wants, or should want, a gutless lawyer.

King & Spalding made an informed business decision. It appears that internal dissent, rather than external pressure, resulted in their withdrawing from the DOMA case. To say that law firms are bound to a case, even after initially committing, denies them a key part of morality: changing course when new facts come to light.

K & S has an obligation to its employees and to its reputation. I highly doubt the US House of Representatives will have a hard time finding new counsel. Many firms would jump at the chance, for a shot at playing in the big leagues.