Based on reports from inside Judge Sumi’s courtroom, it appears that she has issued an expanded TRO ruling that the budget bill is not in effect and was not “published” as required, and enjoins further implementation.

Correction: Per local news reporter, initial reports that Judge found law not in effect were not correct. But TRO continues to prohibit Secretary of State from publishing, so it appears she is viewing the bill as not in effect yet, even if she did not explicitly rule.

She noted her original restraining order issued earlier this month was clear in saying that the state should not proceed with implementing the law. The Walker administration did so after the bill was published Friday by a state agency not included in Sumi’s earlier temporary restraining order.

“Apparently that language was either misunderstood or ignored, but what I said was the further implementation of Act 10 was enjoined. That is what I now want to make crystal clear,” she said.

She noted she has not yet found that lawmakers violated the open meetings law, but noted the Legislature could resolve the matter by passing the bill again.

The Amended TRO now is available.  It is only two pages long, and apparently was prepared as to form by the Democrats (this is common in court cases that one side prepares the form of order), because Judge Sumi struck out the portion as to publication: 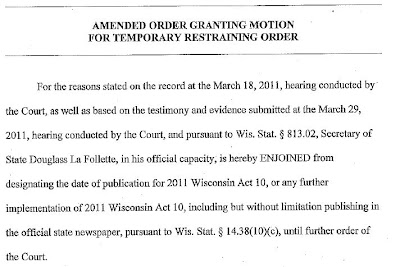 Milwakeean said "while I go"

Promise? I got $100, and a signed Alinsky copy of Obfuscators Anonymous that says you can't stay away.

The governor should start giving out layoff notices pro-rated by the delay of implementation. Let Judge Sumi feel some heat for her actions.

The GOP will never let the funhouse Demonrats get a chance to do another fleebag hotel stunt. My relatives from WI just had dinner with us tonight and I fear that the good citizens of Wisconsin are going to be disgusted by the leftist flimflammery, but at the same time perhaps deceived by the push-polls by PPP & other disreputable polling operations into thinking that the Supreme Court should have another Demonrat.

Or at least not vote in the April 5th elections for the incumbent Republican. If this happens, the lamestream MSM will go bonkers and the brouhaha will continue all summer while recall petitions and other nonsense take away the focus from the real issues of the school unions' having still more power to negotiate than the SEIU has with the federal government.

It's amazing how the Goebbels in the NYT, the Kellers and the Pinch Sulzbergers, seem to orchestrate the media side of the seamy union thugs & white house operatives doing their funding of all sorts of outside agitation in Wisconsin. That's what my teacher relative opined, anyway, and she's taught science in the Milwaukee public school system for decades.

What I find so farcical about this whole thing is this: The duly appointed legislators voted created and passed this law. The court has no jurisdiction over that. they can't say "you can't vote on this law, nor can you pass this law". The way I understand it, she can only rule on if the law is constitutional or not and stop it from being acted on with an injunction; yet here, she actually says "you can't publish this law because ….well just because I say so!"
my opinion? The democrats didn't want to be a part of the legislative process so they ran away. perhaps the next time, they'll stick around and do their jobs.

A commentator at Volokh sums up the state of the law and the controlling authorities that apply to this matter: http://volokh.com/2011/03/29/meanwhile-in-wisconsin-another-tro/#comment-1164674

cboldt:
– What’s next? Judicial review of quorum calls six months after the fact? – FWIW, I recall looking at some of the few cases where judges pierce the veil and look at legislative conduct; and for some reason, “quorum” strikes my weak recollection as being the gravamen of one of the complaints.;

You’re probably thinking of United States v. Ballin, an 1892 SCOTUS case. The decision was released after, and on the same day as, Field v. Clark. The Court considered the method used to determine whether a quorum was present, and whether a majority had voted for the bill. (The underlying question was whether the House could change its rules to include present but non-voting members in the quorum.) Because it uses very circumscribed language, Ballin suggests, but doesn’t unequivocally show, the Court can verify that the Constitutional requirement that the bill was passed by a majority of a quorum:

The Constitution (Article I, Section 5) provides that “each house shall keep a journal of its proceedings;” and that “the yeas and nays of the members of either house on any question shall at the desire of one-fifth of those present, be entered on the journal.” Assuming that by reason of this latter clause, reference may be had to the journal to see whether the yeas and nays were ordered, and, if so, what was the vote disclosed thereby, and assuming, though without deciding, that the facts which the Constitution requires to be placed on the journal may be appealed to on the question whether a law has been legally enacted…

In the case of Wisconsin, the rule was stated in State ex rel. La Follette v. Stitt, 338 N.W.2d 684 (1983): “Unless the claim is that the legislative procedure violated some constitutional provision or right, this court will not, under separation of powers concepts and affording the comity and respect due a co-equal branch of state government, interfere with the conduct of legislative affairs.” In State ex rel. General Motors Corp. v. Oak Creek, 182 N.W.2d 481 (1971) the Wisconsin Supreme Court voided a statute because the yeas and nays weren’t recorded, so they could almost certainly void a statute passed without a quorum. In distinguishing Stitt from an earlier case, the Court strongly indicates it would not void legislative action due to a violation of the open meeting law:

This is consistent with this court’s decision in State ex rel. Lynch v. Conta, 71 Wis. 2d 662, 239 N.W.2d 313 (1976). The issue in that case was whether certain legislators had violated the open meeting law and whether they could be subject to forfeitures for such violations. The case did not present the question of the voidability of legislative actions taken in violation of the open meeting law. We hold that we will not invalidate a legislative action unless the legislative procedures or statute itself constitutes a deprivation of constitutionally guaranteed rights.