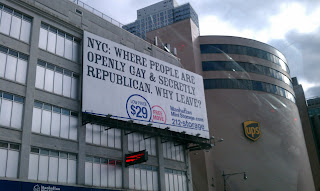 I was in New York over the weekend. Just as I had forgotten how polemic and distasteful Manhattan mini-storage ads were, I saw this gem on the West Side Highway. (I was in the passengers seat, no lefty or righty was hurt in the taking of this picture.)
PR firms have weighed in on this matter to conclude that the overly-abrasive ads really just doesn’t make any sense. I agree. New Yorkers may be Democrats overwhelmingly, but the city itself isn’t very “political” — or at least in comparison to a place like DC. For instance, my “left-leaning independent” (read: politically-apathetic college friends at NYU) really could care less about elected politicians and just want “government to do good.” (Dream on, but at least they have good intentions.) While they may not care for my politics, I am thankful that ads like the mini-storage one don’t make them laugh. They, and most New Yorkers, just see them for what they are: a cheap shot.

@ Harsh Pencil, did you look at the other ads? I know literally nobody who thinks they are clever or funny.

@ The Ghost, I did and have. I never said "apolitical" — they have opinions, but it isn't like DC where it's hard to have a circle of friends who don't share common political ground. New Yorkers have better things to do.

I'm afraid I know the copywriter who wrote this ad. She was a friend and colleague at my former advertising agency who relocated to San Francisco and is freelancing as a creative director for Manhattan Ministorage.

Typical of many people in the ad industry, Ms. L is a self-professed Liberal not because she understands and can defend the substance of her beliefs; Ms. L is a liberal because it fashionable to be so.

And like many of my co-workers, she assumed it was ok to use 'Republican' pejoratively around me, confident of my politics because I happen to be openly gay. While she’s never apologized, Ms. L (and the whole floor) ceased her tea-party jabs when she realized I've been the unintended target of her derision.

It’s much harder to mock Republicans when the likes of Ms. L are unable to match their MSM stereotypes to what they actually know of their conservative friends and acquaintances.

While I don't expect Ms. L to be completely free of her bias, I know that my '2nd coming out' has had a moderating effect on her poisoned view of Republicans. I can't help but think this ad is Miss L's parting shot at NYC and the inconvenient anomaly of gay republicans such as me.

For the record, Ms. L was not responsible for the other subway ads '…return a Republican' and '…safe for tea party'

The first ad proclaimed that storing things at your parents' house meant having to visit. Liberal family values.

Another example of why most people in the New York region ARE NOT closet ReThuuglicans. I know this militia group is associated with the TP, so it's possible this time there will be total control of Gun Rights in this country.

I think this ad & the rest of their ad campaign is in great taste. Please grow a sense of humor. Thanks.
-Ali G.