Regardless of who emerges as the political winner or loser in Madison, Wisconsin, one thing is clear, law enforcement — from the Madison police, to the Dane County Sheriff’s office, to the Capitol and State police — have lost credibility as neutral players in this political standoff.

Time and again, law enforcement has failed even to try to enforce the law, including last night, as this report from the Milwaukee Journal Sentinel indicated:

But it was clear Wednesday night, after thousands descended on the Capitol in reaction to the Senate vote on removing most collective bargaining rights, that police were not going to try to stop protesters from entering what was supposed to be a building closed for the night.

Keep in mind, there is a court order that the building would be shut after regular business hours, yet law enforcement did nothing to enforce that court order.

This has become part of a pattern.  Perhaps the most egregious example was when a Madison police officer addressed a crowd in late February inside the Capitol and actively agitated for the protesters to disregard and defy both the assembly and the Governor when it came to leaving the building at night.

I posted this video on February 27:

If law enforcement does not ensure the ability of the Assembly to meet in the Capitol this morning, including providing safe passage for legislators, then law enforcement will have damaged its unique standing in society.

The police unions in Madison are on the verge of destroying the credibility of law enforcement by taking sides in this political dispute.

It will be interesting to see what happens later today.

Update:  Per Badger14 website, the State Police did make an initial effort to keep protesters out last night.  But, once most protesters had left the building, several dozen protesters were allowed to sleep in antechamber of the Assembly overnight, rather than being removed per court order.

Looking at the videos in the link above, which show the State Police did try to prevent access but were overwhelmed, it was a mistake for me to include them in the list in the opening sentence.

As of 1 p.m. (E.S.T.) the State Police were removing protesters who were blocking the Assembly chamber door who refused to leave voluntarily and under their own control (one shouted “Heil Walker”): 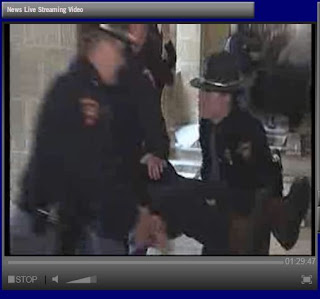 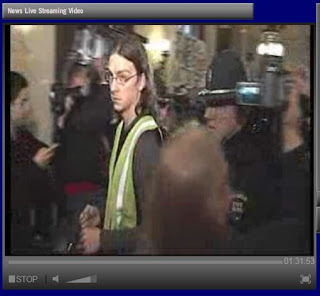 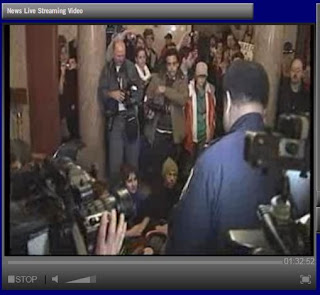 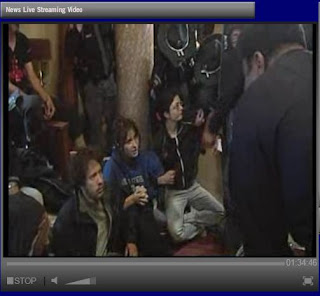 Apparently after the protesters were removed, the doors to the Assembly chamber were still locked, with a small number of Democratic legislators unable to get in (all the rest entered a differenct way), so they started screaming and banging on the door (one who was interviewed said he insisted on going through the main door, and not another entry point): 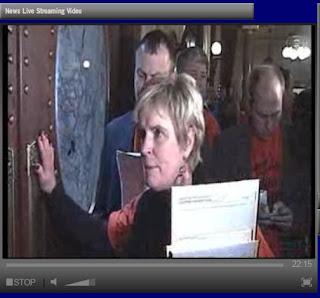 The doors were opened and they were let in.  Jesse Jackson showed up shortly after that, and gave an interview in which he compared Gov. Walker to George Wallace barracading the doors to the University of Alabama, and the union dispute to the voting rights marches in Selma: 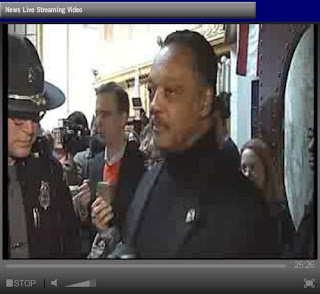 It's well past time for elected officials to insist that law enforcement does just that — or be fired.

I will tell you WHO has the authority: US Marshalls – they can and will arrest/take down all those that refuse to do their duties they swore on oath AND allegiance to do.

National Guard should be posted WITH weapons to protect the Capitol senators/assm/staff workers and make them responsible for all and any actions in regards to the bldg control as well.

If a (D) attempts to do what Cory Mason (D-Racine) did last night and allow people INTO the building, than arrest them and start proceedings to have them removed from office. They are not doing their jobs either.

Many factors go into how police will enforce court orders when dealing with large crowds such as the danger of escalation. Being prudent can diffuse a situation alot easy then going in hell bent.

Part of what tactics one employs depends on one's resources. Look at the Madison PD. They have approximately 400 hundred sworn officers to patrol a city of a quarter million. Does this Department really have the resources to throw into the protest while also performing all their other duties, such as patroling the streets?

Sorry ma'am, no one to respond to your mugging, we where at the capital building for the protest.

Before criticizing and jumping to conclusions about the cops, look at the big picture. Most of their decisions are guided by facts unseen to the public and are for legitimate purposes besides taking sides in a public squabble.

This is what leftists do: they concoct some high-minded sounding slogan to justify breaking the rules. They've besmirched the hard fought for reputation of teachers, doctors, now law enforcement. Talk about useful idiots!

What sort of men and women would we expect the city of Madison to hire to enforce the law? Serious and impartial individuals or polictically correct wusses?