That’s the headline you will not see.  Instead, you will see this headline:

Look at the chart below from the Harvard poll.  It shows increases in approval for everyone, including Republicans and Democrats in Congress.  Here is the chart from the executive summary of the poll: 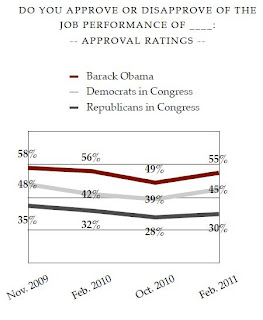 The Yutes is simply happier these days than a few months ago.

But it doesn’t stop there.  Neither the headline-making report nor other Harvard poll reports that I could find measure attitudes towards Obama going back to the fall of 2008.  But other surveys indicate Obama won the youth vote by far larger measures.

While the two data sets (job approval ratings versus actual vote) may not be identical, it is informative that Obama won the youth vote overwhelmingly in 2008:

Young voters [18-29] preferred Obama over John McCain by 68 percent to 30 percent — the highest share of the youth vote obtained by any candidate since exit polls began reporting results by age in 1976, according to CIRCLE, a non-partisan organization that promotes research on the political engagement of Americans between ages 15 and 25.

Compare that number to the number who now say, in the current Harvard poll, they will vote for Obama over a generic Republican opponent: 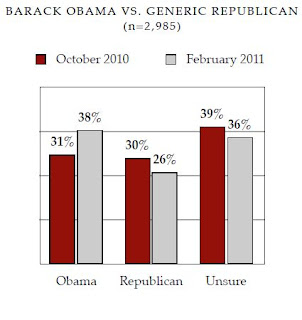 Obama’s support among young voters has dropped from 68% who voted for him in 2008 to 38%  who now say they will vote for him now (“unsure” was not on the ballot in 2008, so it’s hard to account for that, but clearly Obamamania among the youths has dropped).

But what do we get in the headlines?  The same thing we got in 2008, Obamamania.

Heh heh! Before scrolling down I was thinking, "It would be nice to get Matthew's input on this."

Professor, at your Amazon site last night, in addition to the stuff for our kids, I ordered "How to Lie with Statistics" for me. I can't wait for it to arrive.

What I've found interesting here in NYC is how frequently committed Democrats now say, without prompting, that they expect this to be a one-term presidency.