From some of the reports, one would think Wisconsin farmers had turned out en masse with their tractors to side with public sector employee unions against Gov. Scott Walker and the Republicans who control the legislature. 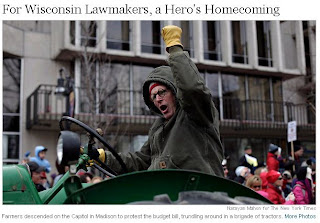 The New York Times reported that “Farmers descended on the Capitol in Madison to protest the budget bill, trundling around in a brigade of tractors,” and featured a photo of someone on a tractor in its story about the protest yesterday in Madison.

A brigade of tractors?  I realize The Times probably was using the term figuratively, but even so, since a brigade typically is 3,000-5,000 soldiers in number, certainly The Times was talking big numbers of tractors in Madison, right?

If not several thousand tractors, certainly the 1000 or more which were driven through Paris, France last spring in protest over food prices, right?  After all, the event was highly publicized by the union movement, as reflected on this Facebook page:

Saturday, at 10am, farmers from the dairyland will bring tractors and solidarity to the Capitol to fight for labor rights and a just state budget. Rural communities will be disproportionately hurt by the cuts to education and Badgercare. Farmers in Wisconsin stand with state workers and all working and middle class families in the state. The event is sponsored by Family Farm Defenders and the Wisconsin Farmers Union. All farmers… and eaters welcome and encouraged to come!

Funds were raised to pay the fuel expenses to encourage participation.

John Nichols at The Nation described the significance of the farmers and workers uniting:

So when the farmers of Wisconsin arrived Saturday, on tractors that rolled in from across the state, Wisconsinites brought this movement full circle.

The tractorcade, organized by the Wisconsin Farmers Union and Family Farm Defenders, began a day of rallying at the Capitol that drew the largest yet—and that signaled the determination of Wisconsinites to keep fighting the Walker agenda….
Wisconsin workers and farmers have, in the words of the tractorcade organizers, decided to “Pull Together!” That’s a slogan that recalls the historic organizing of the farmer-labor movements of the upper Midwest, which had their expression in Wisconsin in the Progressive Party that sent Robert M. La Follette Jr. to the US Senate and elected Phil La Follette as governor in the 1930s.

It has been a long time since Wisconsin has been this united, and since the farmers and workers of the state have spoken in so loud and clear a voice.

So how many tractors actually were driven through Madison?  Well, like the crowd estimates (ranging from 50,000-100,000), it depends who you ask.

But no news reports says there were actually that many. AP reported:

Saturday’s protest got a boost from a parade of more than 30 tractors driven by farmers supporting the union workers.

All these efforts and fundraising, all the hype about the return of the Fleebagger 14 to Madison, the last great rally to show the world that the workers of Wisconsin have united, and they only could get 30-60 farmers to bring their tractors to the parade?

Even these low numbers, however, tend to overstate the significance, because it is not clear that the farmers who drove their tractors even support the unions. Rather, as this article in a local progressive website shows, the farmers were most upset about budget cuts unrelated to collective bargaining.  And Gov. Walker continues to have the support of many agricultural groups.

So there was no Brigade of Tractors, not even anything that legitimately could be called a Tractorcade.

Just fanciful exaggerations by people who bitterly cling to the glory days of the 1930s union movement, not realizing that the world has passed them by.

Well of course it's larger than the Tea Party can muster. They have to show up because the Union told them to.

They're just doing their jobs, except they've been called in on the weekend to put in a few more hours.

This is something I would have expected from Iowahawk.

Even by that count, they fall short of a brigade. Going by the high count of 60, that's 4-6 companies, depending on what TO&E; you're using. 1-2 battalions, and a brigade has at least 4-5, not counting the support units. A task force of tractors at best…

Cyberludite: Well, yes, of course. I thought that was obvious.