As I have mentioned before, my friend Jonathan is studying in Syria — one of the few American students there. His latest blog entry, dated the 23rd of March, offers tremendous insight. Since his blog is probably being monitored, I’ve chosen to copy/paste his latest entry:

I’ve scrupulously avoided politics in many of my blog posts thus far. This is probably due to my personal conviction that Americans tend to view the Middle East through a purely political lens; in this blog, I’ve attempted to go beyond that, by exploring the people of Syria and the personal nature of my abroad experience. However, the ongoing unrest here requires that I update you, my readers, on the view from the inside. This post will explain some key aspects of Syria that the press often ignores.
Unemployment is high. Official Syrian unemployment statistics allege that approximately 8-13% of the population is out of work, which doesn’t seem so bad and is on par with the current rate in the United States. Yet these figures are most likely false, with some suggesting that 20-40% might be more accurate, with unemployment in the under-30 age group up to 50%. Remember that discontented youth are more volatile than the middle-aged.
Syria is has underlying sectarian and ethnic divisions. The president and his political circle consist mostly of Allawite Muslims, a small sect known for its lax rules, and thus distrusted by the Sunni Muslim majority. Allawites and Christians (Syriac, Orthodox, and Armenian) often support the regime because they fear persecution from the Sunnis; they prefer the status quo to Sunni rule. Meanwhile, in the North and Northeast regions, millions of Kurds chafe under the Ba’ath party’s rhetoric of Arabism, which essentially excludes them from Syrian identity. Kurds define themselves more by their ethnicity than by their Syrian citizenship or religion (Sunni Islam) which they share with most Syrians, and they have been a source of civil unrest in the past.
The regime relies on both direct and indirect oppression. Censorship, arbitrary imprisonment, torture, and the suppression of civil society are all forms of “direct” oppression, obvious to the outside observer. What’s less apparent, until you meet Syrians, is the “indirect” oppression of fear. A Syrian friend recently described how he was summoned to the offices of the Military Intelligence Agency a few years ago, and he feared that he would be detained or killed. It turned out that someone had merely found his national ID card and he was questioned by a bureaucrat about how he lost it. But the fear he felt upon entering that building is indicative of a political culture that intentionally fosters terror. Not everyone is in the secret police, but the regime wants everyone to suspect that his neighbor or colleague is an agent – it keeps people quiet.
It’s easier to join a protest than to start one. One thing we’ve learned from recent uprisings in the Arab world is that revolutions depend on momentum. In a culture of fear, nobody wants to be the first one to picket a building, lest he remain alone on the street and be scooped up by the police. However, once a crowd has formed, protestors flood out of their homes and onto the streets, and the mob gains a life of its own. Discontent, too, needs but a spark to transform into rage – one cellphone video of the police beating a citizen, for example. As you follow the news, watch carefully for such symbolic incidents, because they rouse momentum.
As I’ve noted time and again, I’m wary of political predictions. Frankly, I do not know whether the current unrest in Syria will intensify or fade away. What I can tell you is this: the people of Egypt were both afraid and discontented, but a revolution was born because they had nothing to lose. Their anger was more powerful than fear. 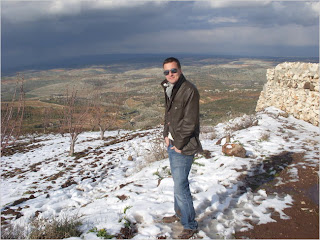 “It’s over; it’s just a question of time,” said a Western diplomat in Damascus, speaking on the condition of anonymity in accordance with diplomatic protocol. “It could be a slow burn, or Qaddafi-esque insanity over the next few days. It’s very tense here, very tense. You can feel it in the air.”

"The rush of revolts may be especially unnerving to the leadership because they have occurred in two strongholds of the leadership. Dara’a is a majority Sunni tribal region that has long been a base of support for the elite; it is the home of key leaders in the military and the government, including the vice president, Farouk al-Sharaa.

Latakia is one of the few places in the country that has an Alawite majority. If the unrest spreads to major cities, where there are Sunni majorities, analysts said, the entire system could become unhinged, as happened in Tunisia and Egypt, where the presidents were forced from power."

My son has a friend whose family is originally from Syria. Although his friend was born here, when it was time for him to settle down his father prearranged his marriage. So his friend went to Syria to get his wife and bring her back here. It seems to be working out just fine too.