Notice how Democrats have been talking lately about how Republicans in Congress are held hostage by Tea Party-backed new members?  And how for years Democrats have made sure to use the term “extremist” when referring to Tea Parties?

It’s a pre-planned line of attack by the Democratic Causus, and one of the enforcers is Chuck Schumer (D-NY).

As reported by The NY Times, not realizing the call line already was active, Schumer instructed other Democratic Senators, shortly before a live conference call, to use that mode of attack, and also admitted he makes sure to use the word “extremist” whenever possible as instructed by the Democratic Caucus (emphasis mine):

Moments before a conference call with reporters was scheduled to get underway on Tuesday morning, apparently unaware that many of the reporters were already on the line, Charles Schumer of New York, the No. 3 Democrat in the Senate, began to instruct fellow senators on how to talk to reporters about the contentious budget process.

After thanking his colleagues — Barbara Boxer of California, Ben Cardin of Maryland, Tom Carper of Delaware and Richard Blumenthal of Connecticut — for doing the budget bidding for the Senate Democrats, who are facing off against the House Republicans over how spending for the rest of the fiscal year, Mr. Schumer told them to portray John Boehner of Ohio, the Speaker of the House, as painted into a box by the Tea Party, and to decry the spending cuts that he wants as extreme. “I always use the word extreme,” Mr. Schumer said, “That is what the caucus instructed me to use this week.”

A minute or two into the talking-points tutorial, though, someone apparently figured out that reporters were listening, and silence fell.

Then the conference call began in earnest, with the Democrats right on message. 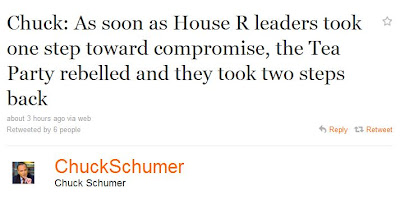 This is the same guy who called Scott Brown a “far right tea-bagger,.

Schumer and the rest of the Dems just don't understand. If Republicans and Democrats are supposed to act the same, why have two parties?

The Tea Party is there to remind everyone that (to borrow one of Obama's favorite expressions) "business as usual" is no longer acceptable.