she is almost entirely a creature of liberals who want to use her as a prop to discredit and attack conservatives. I gather Meghan thinks she is some kind of youth recruiter for a hipper form of conservatism or Republicanism or something. I spend a bit of time following what young conservatives think (I even edited a book on the subject) and as far as I can tell, young conservatives — including the 6.9 percent of them who qualify as “hip” by even liberal standards — do not think much of the young lady to the extent they think about her at all. She is somewhere between Ron Reagan in a dress and Joe Scarborough’s most liberal intern.

I agree with Jonah Goldberg. I wish I could avoid her, but then I would be out of touch with my favorite twitter “identity theft”, McCain Boobette, who had an interview with my friend Alec Jacobs this past year:

TheDC: What about people who say you only have a platform because of your last name?
MM: Whatever, I know that Im out there being a voice for the unrepresented, and my mom & dad say Im great. It has nothing to do with names and labels. I hate labels except cool ones like Betsy Johnson and Chanel.

If you can’t beat them, mock them. Update 3-24-2011 – Meghan McCain has posted a ridiculous Tweet[see note and image below] about this post, which among other things doesn’t even get the author right.The “McCain Boobette” reference specifically was to http://twitter.com/mccainboobette not to her “breast size,” which she would have known had she clicked on the link above in the original post which was to this Daily Caller piece, TheDC Interview: Meet Meghan McCain’s alter-ego — McCain Boobette.  But clicking on links apparently is too deep a thought for Ms. McCain.  Meghan must be really desperate for attention to make something out of nothing.Given Meghan’s performance with her Tweet, it appears she also did not consider that whoever it is who uses the “McCain Boobette” Twitter name was not referring to her “breast size” but her personality: 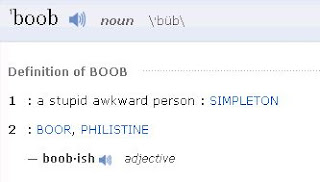 Can’t you just get back to bashing Sarah Palin to get attention?

NOTE 10-3-2011 — McCain recently (as in the past day or two) deleted or hid her false and ridiculous tweet, so here is the image: 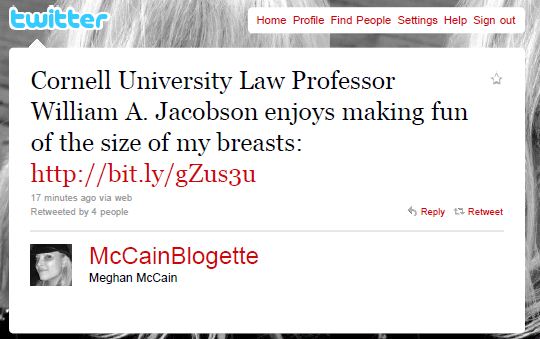 I see your occupation is Adolescent Psychologist.

Do your more mature patients ever have a problem with that?

So much pointless hate… I would say most of you people disgust me, but honestly, I pity all of you. Most of all you, Prof. Jacobson.

@Gerardo . . . you are apparently confusing what you say is "hate" with what is a just little good-natured ridicule!

Please refer back to Saul Alinski 's Rules For Radicals (i.e., for Community Organizers), and specifically refer to the section on tactics . . . remember this one?

"Ridicule is man's most potent weapon."

Well, that one is now a Neo-Rule! And, it applies to dealing with the "useful boobs" as well as to the "others" . . . like you!

Here is a little something for your hate! ♥

Heh heh! That's the best one I've heard all week! Tell us another one!

Ever seen the love directed at a dissenter in the comments section of a lefty blog? Now that is tough love (some would call hate).