Judge Maryann Sumi has issued this morning a two-page ruling saying the budget repair bill is not in effect.  Via JSOnline:

A state law to sharply curb union bargaining by public employees is not in effect, a Dane County judge ruled Thursday, continuing the turmoil over a measure that sparked massive protests and prompted Democrats to boycott the Senate for three weeks

“Based on the briefs of counsel, the uncontroverted testimony, and the evidence received at the March 29, 2011 evidentiary hearing, it is hereby DECLARED that 2011 Wisconsin Act 10 has not been published within the meaning of (state statutes), and is therefore not in effect,” Dane County Circuit Judge Maryann Sumi ruled in a two-paragraph order. 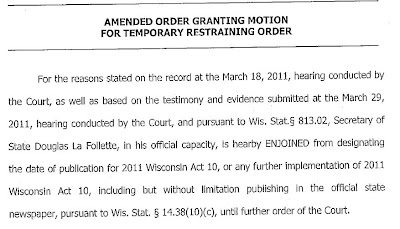 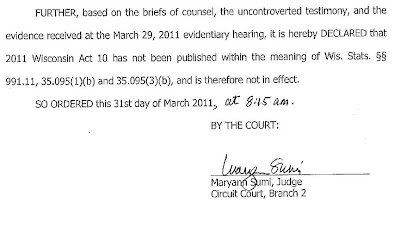 This decision, without any reasoning, puts in context the warning Judge Sumi issued yesterday to attorneys in the case about making remarks which impugn her integrity.  Presumably Judge Sumi knew that this Order would be coming the next day, and also knew the political firestorm that would result.

Before speaking publicly about what is an extraordinary judicial interference in the legislative process, attorneys for the State will have to consider the import of Judge Sumi’s warning.

Updates:  I find it very curious that Judge Sumi felt the need to issue this Order today, when further hearings are scheduled tomorrow.

As Ed Morrissey notes, this is the third version of the TRO in this case.

And, keep in mind that at the end of the day Tuesday, Judge Sumi refused to sign an order containing virtually identical lanauge regarding whether the law was in effect:

So how, with no new evidence, does she reach the legal conclusion that the law was not published?

Perhaps it’s just the passage of time to reflect on the issue, or perhaps it was frustration with what she saw as non-compliance with the first part of the order directing the Secretary of State not to publish and (some unspecified persons) not to implement the bill.  If it were the latter reason, then achieving compliance as to implementation would not require a finding of non-publication.

What a mess.  But I repeat myself.

I was taught that if you don't like a decision, don't go whining about the Judge, take an appeal. Oh that's right they already did. And then they tried to withdraw it but the appellate court wouldn't let them. Seems to me like they're getting out lawyered.

I'm not sure why Wisconsin goes to the expense of voting in a legislature and paying them for doing the state's business when they can have Judge Sumi just rule by fiat.

Since Judge Sue Me now speaks in favor a redo by the GOP by passing the law again, I assume that the Dems and the unions have another set of delays ready to implement should that action present itself.

Judge Sue Me is going to keep this court action in play until after the WISC justice election on April 4 when they attempt to oust Judge Prosser.

The Appeals Ccourt has already refused to rule on the TRO, so is there no court in Wisconsin that is not activist?

How can the judge's order nullify State statute that says that once the law is published by the LRB it goes into effect by operation of law the next day? It's too little too late in my opinion.

I also don't understand why Judge Sumi is not facing ethics charges for not recusing herself from this case because of her very obvious conflict of interest since her son is or was a union official in the private sector. She cannot possibly be unbiased in this matter.

Why can't the State move to replace Judge Sumi because of the facts that have come to light about her son's union organizing background and her husband's very large contributions to Democratic candidates? This is simple fairness.