I expect cheap shots at Sarah Palin from Politico.  It’s why Politico’s news operation has lost much of its credibility with me.  Witness the photo Politico decided to run accompanying a hit piece on Palin — not exactly subtle editorializing of what barely purports to be a news story. 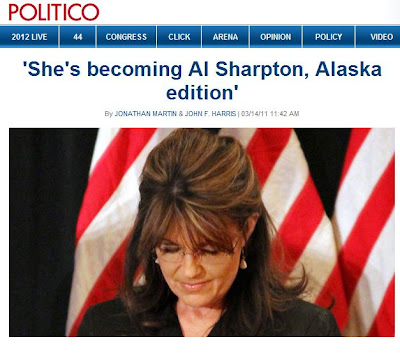 Here is the quote (emphasis mine):

“The appeal of conservatism is supposed to be people taking responsibility for their own actions,” said Labash. “But if you close your eyes and listen to Palin and her most irate supporters constantly squawk or bellyache or tweet about how unfair a ride she gets from evil mustache-twirling elites and RINO saboteurs, she sounds like a professional victimologist, the flip side of any lefty grievance group leader. She’s becoming Al Sharpton, Alaska edition. The only difference being, she wears naughty-librarian glasses instead of a James Brown ‘do.”

Naughty-librarian glasses? Real classy.  As if comparing Palin to Sharpton were not bad enough.

Does being a conservative now require that we engage in the types of sexualized portrayals of conservative women perpetrated by the left-blogosphere?

What’s next, Mr. Labash, should we double-check to see if Palin had breast enlargement surgery?  That will get you quoted in Gawker, too.

Hey, how about some Palin “hand job” jokes at the next Weekly Standard lunch meeting, that should get a round of laughs.

Oh, but pointing that out must make me an Al Sharpton, Rhode Island (and Ithaca) Edition, right?

Actually, the opposite is true.

You have yet to provide any substantive support for this wild assertion. After reading most of her postings on Facebook, I see a very well informed and intelligent person, with an extraordinary amount of common sense.

I haven't heard any whining.

>> But W took it all and kept on going, leaving it to Cheney and otters to fire back, doing his job and never complaining about his opponents or the intractably hosteled media. Come to think of it, he had continued to comport himself that way out of office. Now that is a leader.

Actually, I see that as a major problem. It's a sign of weakness. 99% of the people will take the lack of standing up for yourself as being weak. You're in the 1% of the people who see it as strength. Everyone is left asking "when is W going to fight?" Answer: Never.

Huh? She received her bachelor's degree in communications with an emphasis in journalism in 1987.

>> Truman was a lifelong serious student of history, government and military affairs, handily one of the best read and informed people ever to sit in the White House.

Yet, when the railway workers turned down a proposed settlement, Truman seized control of the railways and threatened to draft striking workers into the armed forces. That's a dope.

Truman fought the republicans bitterly on domestic issues, but fortunately failed to prevent tax cuts or the removal of price controls. Truman is a dope.

After mis-micromanaging the Korean war, he fired General Douglas MacArthur. This is regarded as among the least politically popular decisions in presidential history. It doesn't stand the test of time. Truman was a dope.

Burke, your promoting of "best read and informed" over actually coming to the correct conclusions shows how you judge people. Since being right doesn't matter to you, it's no wonder you think smart people are dopes and vice versa. Carter, Clinton, Bush and Truman were all dopes because they were often wrong on crucial issues. Sarah Palin is not a dope because she gets it right. Being correct is the test.

And who is the number one TV pundit in America?

The uninspiring cast of characters range from previous failed presidential contenders like Romney, Huckabee, Giuliani and Paul to charisma-free bores like Pawlenty and Daniels to “why even bother” candidates like Santorum and Bolton. So it should come as no surprise that Gingrich is a leading contender, because he at least is a “fresh” face to presidential politics and capable of occasionally being provocative. However, one problem underlying all of these candidates is that none of them can fire up a crowd like Obama. Palin can. Another problem is that none of those Republicans generate interest with every media interview like Obama always did as a candidate and continues to do as President. Can Palin generate generate interest with every media interview? Yes she can.

Sarah, it is time to listen to your own advice. Don’t retreat, run for President."

"There is tremendous interest in political and media circles in America over Sarah Palin's visit to India," said a press release from the India Today Conclave.

viator, the rules of election politics determine that it would be unwise to declare before this summer.