There’s a reason this blog is called Legal Insurrection.  An insurrection by definition is illegal, but that is exactly what some police union members in Wisconsin have threatened in support of fellow public sector unions.

The video below show a policeman (presumably off-duty but wearing what looks like a police-issue sweater with insignia) who addressed the crowd of protesters inside the Wisconsin Capitol building on February 24, and threatened disobedience to state government.

Here is the transcription by a supporter of the police protest of the key passage:

“[…] This is not a budget issue! This is a CIVIL RIGHTS ISSUE! […] Mr. Walker! […] We know pretty well now who you work for! [applause] Let me tell you who WE work for! [points to self and police emblem] We work for all of these people! [applause] We are not here, Mr. Walker, to do your bidding! We are here to do their bidding! […] Mr. Walker, this not your House! This is all of our House! [camera pans 360°]”

Although there is no video of it, according to a protester from inside the Capitol, the police union members more generally threatened to disobey any future orders to clear protesters from the building, currently expected to take place at 4 p.m. on Sunday, February 27:

“Hundreds of cops have just marched into the Wisconsin state capitol building to protest the anti-Union bill, to massive applause. They now join up to 600 people who are inside.”

“Police have just announced to the crowds inside the occupied State Capitol of Wisconsin: ‘We have been ordered by the legislature to kick you all out at 4:00 today. But we know what’s right from wrong. We will not be kicking anyone out, in fact, we will be sleeping here with you!’ Unreal.

Here are the protester’s tweets (here and here) at the time of the police union announcement:

To the extent the policeman in the video above, while off duty, wished to participate in the political process, that was fine. But the policeman went much further, and suggested to the protesters that he would disobey the Governor.  The announcement by the police union members that they would refuse an order from the legislature to evict the protesters from the building also went far beyond mere political speech.

It’s unclear to me what the lines of command are in Wisconsin, and whether the departments in which these policemen work ultimately are under the control of the Governor and/or legislature.  Clearly, the Governor does control the National Guard.  Regardless, the police union members involved have actively advocated and offered to participate in insurrection against the legal authority in Wisconsin.

More than anything, this shows the dangers of public sector unions.  Those who work for the state occupy a different position than those who work in the private sector because they carry the weight of state authority.  When those state workers are in law enforcement, they carry special obligations not to use their positions for political purposes.

When an off-duty policeman wearing police insignia takes a megaphone and announces that he and his fellow police union members will disobey orders, that policeman — at a minimum — has dishonored his pledge to uphold the law.

It appears that by the end of today we will know whether the police union members’ talk of insurrection was bluster (which I suspect is the case), or if they really will risk their careers by disobeying lawful orders from legitimate and duly elected state authority.

Update: The Daily Mail identifies the insignia worn by the policeman in the video as a Madison Police Department badge: 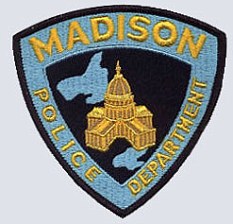 Thanks for the long and thoughtful response. The firing procedures in the public sector seem somewhat similar (in effect) to those of large corporations– employees are ‘at will’ but also working in an environment enlightened by the costs of replacing and retraining, and the potential for litigation.

As far as ruinous pensions, I have experienced the burden of being a post-baby boomer and been in situations where the senior staff made more than those coming in would ever make in real dollars. I'm all for equity and reasonable solutions. But many times, those who draw the big pensions aren’t in the union. But even if they were, who yielded this? If the administration that made this commitment was held politically hostage by the union, I think you’re saying the union would influence the democratic process in a way unfavorable to the administration. So, the admin. acted in self-interest. What happened to public service? Now Walker wants to eliminate the potential for a dollar-enabled machine to come up against his dollar-enabled machine. Isn't this anti-democratic? Shouldn't he let voters decide? As for any corruption, shouldn't that be in the Attny General's office instead of the Governor's?

I think democracy is sacred. But Walker didn't run on a union busting platform. He has definitely been a case of bait and switch. And the Pew Poll says he would lose an election today.

When I said schools need stability in an environment of fleeting political pressure, I wasn't being anti-democratic… it's just pragmatic. We don't reinvent institutions every time there's a change of guard. A lot of government agencies, for example, maintain a large staff of experts that are not political appointees, and who are paid to be professionals regardless of the party in power. I am thinking of USAID, but I'm sure it's true for many. Teachers are professionals. That there have not been enough ‘highly qualified teachers’ is a function of their pay and the persistent disrespect. To say nothing of the working conditions. They are saddled with teaching kids in large classes with a vast range of skill levels grouped by age (which is wrongheaded– students should not be grouped by age). They work long hours, fill out endless reports and are always put on the defensive. I have some very smart, very effective teachers as friends (who went into it for altruistic reasons) who are weary from the disregard for them as professionals. The fact is, administrators are frequently hacks, or hostage to petty ambitions.)

One other thing re: the structure of private/ public sector negotiations. Public employees do not square off with voters– it is with the administration hired by the voters to manage the state. Much like management has been hired by a cascade down from the CEO who is really the only one accountable to stockholders, and then only those who have a large holding to have influence. That is miserably few.

There’s a lot of Democrat bashing on this site. I just stumbled here, and I obviously don't share the views of most posters, but I am interested in hearing what they have to say. Not because ‘the Dems lost’ elections. My president is a Dem. My rep is a Dem. My state’s senators are one of each. But I really am more American than citizen of the world, and concerned about the future of our country. I think the endless fighting amongst Americans is destroying us.

Finally– would someone please talk to the part of the bill that allows infrastructure to be sold off without open competitive bidding? From here, it looks like another chapter of corporate looting.

Sadly so much ignorance and Koolaid consumption here…..

Walker had proved himself to be a liar. First, it was about the money. The unions gave him the money, yet he still wants to kill the unions…..

Public employee unions are more professional than any of these crooked politicians…..

The political corruption is with the politicians, not the public sector unions.

The unions are not asking for no-bid contracts to give away state properties….

Many of those public sector workers have saved the taxpayer BILLIONS and Billions of dollars…. while the politicians have given away hundreds of billions to the crooks on Wall Street…..

As to democrats not cooperating after losing elections…. you mean like in the US Senate with more than 200 filibusters last year??????

The "budge repair" bill is designed to destroy the state's economy.

It will cut almost $1 billion from education, yet make it illegal for districts to try to find additional monies locally with property taxes…. they can not even put them on the ballot.

Walker wants to sell off state facilities with no-bid contracts ….got a buck for a power plant?

No-bid contracts did so well in Iraq and Afghanistan — companies paid BILLIONS to electrocute American soldiers….and to poison them with toxic or tainted food…..

And calling out the National Guard for peaceful protests worked so well for Kent State a few decades ago.

BTW, most of Wisconsin's NG equipment is still in Iraq and Afghanistan…..