Story About Gov. Walker Being Kicked Out Of Restaurant Appears To Be A Hoax

Story About Gov. Walker Being Kicked Out Of Restaurant Appears To Be A Hoax 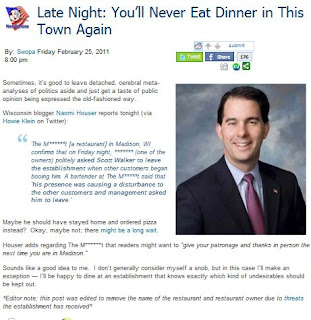 The folks at Firedoglake were very excited about the story that Wisconsin Gov. Scott Walker was kicked out of a restaurant in Madison, based on a report by a blogger in Madison:

Sometimes, it’s good to leave detached, cerebral meta-analyses of politics aside and just get a taste of public opinion being expressed the old-fashioned way.

The M******t [a restaurant] in Madison, WI confirms that on Friday night, ******* (one of the owners) politely asked Scott Walker to leave the establishment when other customers began booing him. A bartender at The M*****t said that ‘his presence was causing a disturbance to the other customers and management asked him to leave.’

Maybe he should have stayed home and ordered pizza instead? Okay, maybe not; there might be a long wait.

Houser adds regarding The M******t that readers might want to “give your patronage and thanks in person the next time you are in Madison.”

Sounds like a good idea to me. I don’t generally consider myself a snob, but in this case I’ll make an exception — I’ll be happy to dine at an establishment that knows exactly which kind of undesirables should be kept out.

*Editor note: this post was edited to remove the name of the restaurant and restaurant owner due to threats the establishment has received*

And at Democratic Underground, the folks were absolutely ecstatic over the news.

But according to Badger Blogger, the whole thing was a hoax by the restaurant itself; Walker denies ever being at the restaurant:

Well my friends, this is the case of a Madison restaurant trying to gain liberal credibility by making up a total lie about how they booted out Scott Walker out of their establishment. When BadgerBlogger called them to confirm the story, the staff refused to confirm or deny, and continued to obfuscate until they hung up the phone… But in fact, they didn’t hang up, it appears that they accidentally put the phone on speaker…. And BadgerBlogger tapes continued to roll.

Our audio captures the restaurant staff talking about how they have to take down the blog posting because people are starting to call about it, you can actually hear them logging into the blog and deleting it. Too late.

We confirm with Governor Walker’s staff that the Governor has never been to that restaurant, this was an attempted “punking” by employees of The Merchant Restaurant, but look who got punked… In the words of Joe Wilson, You Lie!

You can listen to our audio, and judge for yourself. Do not turn it off after the hang-up, that’s when it gets good.

At least there does not appear to have been a crime committed here, unlike the possible identity theft perpetrated against David Koch.

Instead, the anti-Walker forces just made fools of themselves regardless of the truth of the story.  If the story were true, then the restaurant owners were creeps; if not true, then they were just a bunch of liars.

Update:  In comments to a post at American Power, the author of the original blog story about the incident denies that this is a hoax or that she has any connection to the restaurant.

"The ends justify the means"

And, the end is when we justify the mean. Where can any of us go from there?

It turns out that this is completely untrue. Walker tells CBS News’ Chris Wragge:

There are 314 fire and police unions in the state. Four of them endorsed me. All the rest endorsed my opponent.

NewsBusters’ Noel Sheppard has an impressive roundup of newspaper headlines and other proof for those not inclined to take Walker’s word for it.

I see, it's praiseworthy to harass a citizen–which the governor is–who is minding his own business in a public place and force him to leave even though he is being quiet and not bothering anyone.

Remind me again about how liberals are tolerant, open, broad-minded, and all that, because I keep forgetting.

At the Merchant Restaurant, we serve up douchebaggery, fresh!

I've read posts on this at 6-8 blogs. Can't find any news sources referring to it other than blogs. The source always traces back to Naomi Houser. The Merchant Restaurant Facebook page has a discussion "Walker OUT" but all that is there is other people's comments and no specifics or anything saying that they actually kicked Walker out.

All looks very suspicious to me. Even the report of threats made to the restaurant were reported by Houser in the comments at Fire Dog Lake. I'm not sure what kind of threats the Merchant was getting and condemn threats of violence. But, you can't expect a wholly positive reaction when publicizing something like this.

If this is a hoax, I'd bet the Merchant Restaurant is in on it as I can find no evidence they're disavowing it.