Now If Mubarek Were An Anti-American Dictator

Now If Mubarek Were An Anti-American Dictator

Posted by William A. Jacobson Saturday, February 5, 2011 at 08:20am 12 Comments
More Sharing Options

Let’s face it, he’d get the “hands off” treatment from this administration. Regime change seems to be United States policy only for our friends. 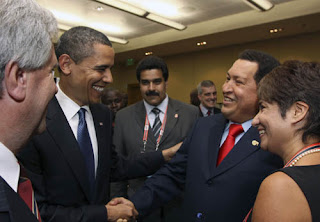 Did Obama demand that Hugo Chavez transition to leave office when peaceful protesters were beaten in the streets of Caracas, or at any point as Chavez has used his thugs to intimidate the opposition?

Have we forgotten how Obama came to the assistance of Chavez-wannabe Manuel Zelaya in Honduras, based on plainly false arguments about Honduran law, and then helped organize international sanctions? Keeping an anti-American president-for-life in Honduras didn’t seem to be a problem, notwithstanding the rulings of the Honduran Supreme Court and legislature to the contrary.

Remember the non-interference policy when Iran erupted with protests in June 2009 over rigged elections, and how the administration went out of its way not to meddle?  How is it that we insist on a policy of regime change for our closest Muslim ally but not our worst Muslim enemy?

This administration still talks softly with anti-American regimes and carries a big stick with our friends.

None of this means the administration is wrong about Egypt, but it sure would be nice for Obama to start making demands on our enemies too.

But then Obama is consistent in his policy by your own accounting as much as we disagree with his policy. Given that Obama met with the Muslim Brotherhood in 2009 in DC and the State Department facilitated meetings in New York for groups opposed to the Egyptian government for the purpose of replacing Mubarak, Obama is totally consistent.

Sometimes in defiance of our rational view of the world, someone holds the opposite view with their own set of rationalizations. Remember Obama opposes the view that the US is a leader of (free world) nations, in his world view the US is only one nation among many, thus his apology tour. There is a method to his madness, it is rational from his POV, it is not one we would conceive and therefore one we refuse to understand much less accept.

Regarding Egypt's food supply problem…you know, they have a lot of land and it's really a shame that they can't think of anyone who has some experience and expertise in turning deserts into productive farmland. I mean, who in the Middle East could know something about that, develops technology to increase food supply, and might even be eager to engage in cooperative activity like that? Anyone?

It's not surprising that Egyptians and Arabs so readily turn towards theories that others are plotting against them; if they looked at the real reason why they're in the mess they're in it might actually require some serious rethinking/