After yesterday’s speech by Hosni Mubarek, I noted: “Things will be interesting. I can’t imagine the situation will stay stable until September.”

Well I was right, although I didn’t predict Mubarek would resign the next day.

But it has happened, and now the military controls Egypt.

I repeat what I said yesterday, but in a different context:  “Things will be interesting. I can’t imagine the situation will stay stable until September.”

The reverberations will be felt throughout the Middle East, and not just with regard to the Israeli-Egyptian peace treaty.

It will be interesting to see if the same standard will be applied by the Obama administration and the Europeans to Syria and Iran — change now (or yesterday) or else.

And once the shackles are removed from the Arab street, will it mean war or peace?

If I were the Israelis, I’d be dusting off the old Sinai tank battle maps and strategies, and calling on the veterans of the prior Sinai battles for wisdom.  Because at 3 a.m. there isn’t going to be any help.

Update:  I tweeted this yesterday regarding what was being broadcast over the loudspeakers during the anti-Murarek protests:

There is tremendous opportunity for the Egyptian people, but also tremendous risk.

Screen shot of military officer delivering statement on Egyptian TV, thanking Mubarek, and stating that the military will issue further information on what is to happen next: 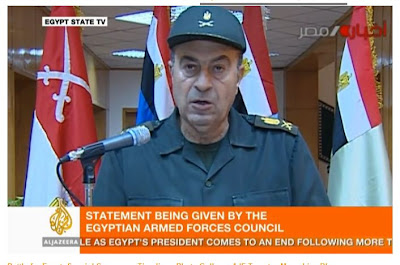 This may be the face of Egypt for the coming months.  And it could be worse.

The same "Nile water to the Zionists" speaker also said that Mubarak disrespected Islam which got loud cheers.

95% think Islam should play a large role in Egyptian politics

75% Egyptians think the death penalty should be levied on anyone who leaves Islam, hands and feet should be cut off for crimes like theft, and stoning to death is acceptable for anyone who commits adultry.

Yeah, Egypt is going to go the way of democracy. And pigs can fly.

Wolf Blitzer: I wonder if Obama’s Cairo speech had something to do with this:

I got your tweets, when the Imam was speaking and being translated by Fox News. Only on Fox – no one else covering this clear message of Islamic hate feeding the protesters. No, they will push the "It was ALL Obama's doing" – getting ready for 2012.

The cleric's preaching, revealing the direction this will go, is what the MSM will not tell us, and why we will rue the day that we did not support Mubarek. And rue the day, even more vehemently, that Obama was elected.

I agree with you; Israel needs to prepare, and they cannot depend on the US. I wonder if Great Britain or any other European country will stand with Israel? The people of Egypt are getting what they asked for – and "Iran on the Nile" is being born. I will be praying for Israel.