Posted by William A. Jacobson Saturday, February 26, 2011 at 10:06am 7 Comments
More Sharing Options

Spotted in Ithaca this morning: 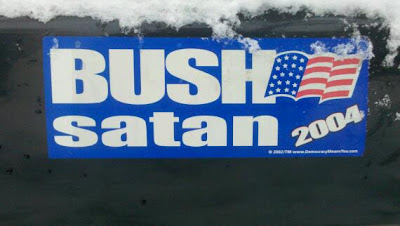 And while you’re at it, don’t you miss the old civility?

It's derogatory in a way too nuanced for the left to understand.

Professor, with regard to your closing inquiry, to wit:

"And while you're at it, don't you miss the old civility?"

I suppose I would, if only I could recall a clear instance or two. Really trying here! Still trying!

In keeping with the bumper sticker theme, perhaps you were referring to something like this?

I found it amongst a collection put together by Zombietime (who, in turn, credited "Last Mohican" with the photo).

The Zombietime post consists of examples of both explicit and implicit threats upon the person of our former President, back in the not too distant past when any notion of civility in public discourse had decidedly taken a back seat to non-encomious vituperation. At least it had on the left!

You’ll note, as did the author at Zombietime, the other (Obama '08) bumper-sticker on the vehicle, up near the window.

That pretty well suggests that this particular instance of bumper-sticker incivility can fairly be attributed to a larboard-leaning Obama supporter . . . at least he or she was back in '08.

So it would seem, anyway.

So, no, I can't say that I really miss that sort of old "civility."