Perhaps the most common is to attribute the views expressed in comments to the blogger.  The problem there is that the nature of a comment section is to give people other than the blogger the chance to express an opinion, so one has nothing to do with the other.  In addition, as happened to Sarah Palin, sometimes comments are planted for the deliberate purpose of making the blogger (or website organizer) look bad.

The Southern Poverty Law Center has used this trick by claiming that linkage by a racist or white supremacist website is evidence that the content linked and the blogger linked reflect the views of the linking website.  With regard to Pamela Geller SPLC wrote:

“Her comments were so incendiary, in fact, that several neo-Nazi organizations even ignored the fact that she is Jewish and published her diatribes.”

On November 13, 2010, I was harshly critical of Greenwald for his post Eric Cantor’s Pledge of Allegiance in which Greenwald suggested that Eric Cantor (R-Va) was disloyal to the United States and had instead pledged allegiance to Israel.  Greenwald responded on November 20, (wrongly) claiming that I was accusing him of being anti-semitic.  In preparing my further response, I noticed that Greenwald’s original post had been reposted at Stormfront, a white supremacist website.

I could have used the Stormfront reposting against Greenwald, but that would have been as wrong as what the SPLC did to Geller.

Both Greenwald and Geller (and I and every other blogger) deserve their writings to be praised or criticized based on the only thing the writer can control, namely, the content.  We are not responsible for people who comment on it, or link to it. 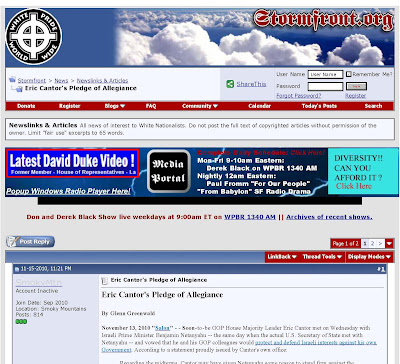 For SPLC, it's all about the Benjamins: