There are all these websites tracking high profile opinion makers like … me.  Actually, they call it “well known wags.”

Anyway, I can’t really argue with the algorithm.  This seems about right: 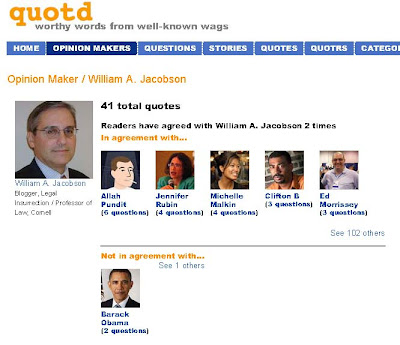 I'm a reader who's never disagreed with Prof. Jacobson; in fact, I've apparently supported both of his 41 total quotes and sum of his blog existence.

"quotd" must be as much about miscounting as it is misspelling.

I don't know which is worse…whining about being overworked or tooting your own horn too much! Ha! Nice to see some recognition nonetheless!

I particularly like the 2nd part – "Not in agreement with…..Barack Obama." Heh. Keep it up, Professor!!

Professor Jacobson,
As a supposed Conservative (I find a lot to like in your blog, except for the Republican Party cheerleading, since both parties are 2 sides of the same Tyrannical goliath), and a Law professor who purports to be a Constitutionalist, you should of course be anti- Barack Obama. But is a shame that you have been absent on the Obama Presidential eligibility issue.
Even a Democratic party hack like Laurence Tribe knows that Obama is ineligible (not a natural born Citizen). He defined A2S1C5 as describing those "born WITHIN the territory and ALLEGIANCE of a nation" during the Resolution 511 hearings. Obama was born w/ split allegiance (at best), so he was not born "within" the allegiance of the US, and may be a British Citizen to this day.
THIS is the REAL issue of the times. Everything Obama does is a consequence of his lack of allegiance and attachment to this country (remember Federalist #68, where A. Hamilton describes A2S1C5 as a security measure against foreign influence, and the desire that the chief magistarte be a "creature of our own"?, well Obama is certainly not a creature of our own). Yet you, a Constitutional scholar have been silent, other than a few "birther" posts nibbling at the edges of the Birth Certificate controversy (a pic on a website is HEARSAY, and proof of NOTHING).
Have you been told to shut up? Are you afraid of the media invented "Birther" epithet?
A2S1C5 means the same as it did in 1787 (one born in the US of US Citizen parents) a Term of Art of Natural Law as explained by Vattel and directly defined as such in the dicta of many citizenship SCOTUS cases (The Venus, Minor v. Happersett, Wong Kim Ark and Perkins v. Elg to name a few), and recently by Laurence Tribe. This is over 200 years of the same understanding of the term, yet we have, and academics like you allow, a man to Usurp the Presidency with everything about him hidden, except for the admitted FACT of his father's foreign citizenship. Obama was ADMITTEDLY born with British citizenship, and that alone disqualifies him, even if born on the Oval Office desk. You, and other commentators (you seem to enjoy being a "wag"), like Volokh and Turley, are as responsible for the ignorance of this Constitutional Catastrophy as the mainstream media. It is not going away. Why don't you get out front of this issue, before you are surprised and embarrassed for not standing up earlier for an issue that you should have known plenty about (you are an expert I assume). Or you can just be cowed and embarrassed by the "birther" epithet.
When will you do a post on Obama's eligibility per A2S1C5, that goes further than the argument about WHERE he was born? The entire 110th and 111th Congress have committed treason, and you and those that should know better let them do it.