According to the YouTube notice, which appears at Big Journalism (h/t Aaron Worthing at Patterico), the person whose tweet appears at 1:50 of the video is the person who complained.  Here is the screen shot at 1:50: 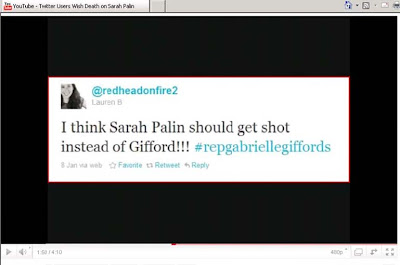 I have no idea what YouTube will do, but it does seem odd that someone would sent a death wish into the Twitter universe and then claim privacy.

Sorry lady, you’ll have to live with the consequences of your Tweet, because even if YouTube takes down the video, we all have screen shots.

Which brings me to a third principle.  You can’t take it back on the internet.

Update:  YouTube removed the video.  All of the screenshots have been saved by a reader, and are available here and also at Patterico.  A new location for the video will be linked once available.

Update 1-13-2011:  Per Aaron Worthing, two of the persons (including Moriah Jovan) who sent tweets in the video assert that the tweets are not what they seem, and that they were mocking the death wishes, not making them.

Her tweets are blocked, but her twitpix aren't:

Say, is this Snowflake, or another Petulant Leftie with the same name and mental deficiency?