Tonight’s issue came to my attention due to the controversy stirred up in Australia over these two t-shirts: The t-shirts, particularly the one that says “we eat meat, we drink beer and we speak f**kin English,” have been branded as “racist,” as reported by the Herald Sun:

RACIST T-shirts on sale at the Queen Victoria Market are telling people from international backgrounds to “speak f—–‘ English”.

The shirts, which are on a stall close to shops selling stuffed koalas and boomerangs, have been branded ignorant by a multicultural group….

The discovery of the provocative shirts comes after the Federation of the Ethnic Communities Councils of Australia met sporting, religious and ethnic groups around the country last month to tackle racism nationwide.

Queen Victoria Market spokeswoman Misti Dullard said the market was “investigating the appropriateness” of the T-shirts and other items sold by stall operators.

“We have noticed that recently there has been an increase in (those) types of T-shirts,” Ms Dullard said.

We frequently hear people refer to English-only policies as “racist,” but I think that is a misnomer.

The desire to maintain a nation’s predominant language is not a racial classification.  The French are not racist for wanting to maintain French as the nation’s language, and that goes for just about any other country.

An English-only policy here would apply as equally to immigrant Swedes as it would to Argentinians.  A black person from Britain would have no trouble complying while a Caucasian who grew up in Spain might have trouble.  The American child of a Chinese immigrant would not have a problem, while the parent may — yet they are of the same race.

Requiring English-only, or English as the core language of Australia, or Britain, or the U.S., simply does not reflect racial classifications.  Criticize it if you want, but not on racial lines.

Applying the term “racist” is simply a means of preventing a rational conversation on whether an English-speaking nation has the same rights as other nations to maintain the predominant, and in many cases unifying, language.  I say Oui!

Indeed, I’m wondering why the t-shirt is not under attack for being anti-vegetarian, since it also demands that people eat meat.

As we know, hatred of vegetarians is a growing problem (even the vegans hate them).  Godwin must be turning over in his cabbage patch, because they’re already comparing vegetarians to Hitler.

And while it is not acceptable to make fun of racial minorities, anti-vegetarian humor is out in the open:

First they came for the vegetarians ….

I demand that the Southern Poverty Law Center add the Anti-Vegetarian Society of Meat Eaters to its list of hate groups.  Think how many donations it will bring in for SPLC from the vegetarians, and those who love them.

Now repeat after me, in English only:

We are all vegetarians now.

Update:  Thanks to reader Helen for this photo taken last August in Sheridan, Wyoming: 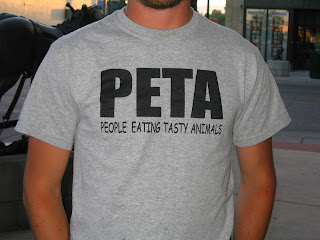 Once upon a time, people agreed "When in Rome, do as the Romans." But since Rome collapsed about 1600 years ago, I guess it's now twice upon a time.

Perverting language is what Progressives do: Killing an unborn human being is "choice." Defending traditional morals is "intolerance." Engaging in aberrant sexual behavior is "lifestyle," etc.

The most recent absurdity involves countering these obtuse Progressives with "What race is Muslim?"

It's all part of the Progressives' "Alinsky-ization" of society: "Pick the Target, Freeze It, Personalize It and Polarize It." Then destroy by any means necessary.

The BORG did the same thing (ha ha).

You will be assimilated Tees available soon.

I've been a vegetarian (not vegan) for almost 40 years. Wife longer than that. All three children vegetarians, all in highly responsible professions, to include national security.

I discourage people who inquire about becoming vegetarians. I don't say don't do it, I say it's far more than what you eat. It's a way of living that involves all five senses, not only taste. And it involves intellectual and spiritual outlook. It's a way of seeing, which means a way of life. And it's very difficult to change over from a flesh diet (which includes eggs). VERY difficult. It's akin to drug withdrawal. So I discourage inquiries and disparage trivial efforts.

Everyone in my orbit knows I am a vegetarian and almost none disparage me on that account. I hold considerable responsibility in one circle that is almost uniformly flesh-eating.

As some observe, accurately, recently minted vegetarians — and most vegans, BTW — are usually censorious of non-veggies, to the point of making the latter want to run from the former. Who likes a smug, judgmental personality? They don't like themselves even.

Vegetarian diet does not necessarily make one peaceable. Arjuna and his brothers were vegetarians. There are US Armed Forces members who are vegetarians, more than one might imagine, including in line units.

Vegetarian diet promotes, but does not make, one tend toward the calm, which is of great military and other advantage, BTW. It also, as is known, promotes freedom from toxic substances found in flesh. And it promotes compassion for all creatures, a phenomenon in short supply today.

That said, I discourage anyone from becoming vegetarian by pointing out its difficulty, akin to withdrawal from drugs, and its life-guiding effects. I also point out that the Rule of St. Benedict, which is the basis of Western Civilization, specifies a vegetarian diet with one exception, animal broth during illness.

And I condemn efforts by any politician or government agency to force a diet on anyone. That's un-American, Michelle, or whatever your name is, and I know you know it is.

And I condemn organizations and persons who use the pretense of serving animals to bully or terrorize for a political agenda, usually pro chaos.

Now, those are facts and should not be governmental or peer-pressure policies. Not eating flesh should be like not murdering unborn children and not engaging in behavior that is unproductive: neither legal nor illegal, just unthinkable.

And Professor Jacobson, you are a lawyer and should be expected to be able to understand the precise meaning of words. Of course these t-shirts are racist. "Racist" means "I disagree with something." If it ever had any other meaning that has long since been lost.

For example, Jane Austen used "wonderful" to mean "something to be wondered about," e.g. when she writes in "Northanger Abbey" that "it was wonderful that her friends should be so little elated by possession…" she doesn't mean "great," or "keen," she means something to wonder about.

Similarly, "racism" used to mean something like "treating people differently because of their skin color" or "ascribing certain abilities, talents, or opinions to someone because of that person's skin color." But doing so is now a hallmark of virtually every imaginable liberal social policy and liberals, as we know, are profoundly not racist.

There are many issues involved in those T-shirt statements. Do I agree with wearing such an item? Actually NO.

Whilst I would agree with the bilingual person above, I have to disagree with his statements for the following reason:

Australia was colonized by English speaking people in the initial phase. This made English the dominant language. Even the Aborigine have to learn English.

The requirement is speak English, even as a second language… it is not about English only.

On this last point I want to tell a story that involves a Polish migrant and his family who had come to Australia after the second world war. This man, a friend of my late father, would not allow his wife to speak English. It also meant confusion for their son, who would have to speak English at school and then converse in Polish in the home. This is something that goes both ways.

We have many migrants who have come to Australia without knowing English. Prior to the era of the Whitlam government all intending migrants had to pass a written or oral English test. When you think about it, by being able to speak the language of the country where you want to migrate makes a lot of sense. It helps most of all with integration.

I have many friends who have an Italian background. The children were usually the first to learn English and to act as interpreter for their parents. Ditto for the Greeks, French, Germans, Hungarians etc.

As a little side note, one of my great grandparents did not come from that English background. He came from Saxony in Germany, and this was in the 1800s.

The flag t-shirt could be just as pointed towards those who are insisting that once again we visit the perennial whining about wanting to change the flag. These are usual the pro-Republic anti-Monarchist crowd.

Those t-shirts are not against those who are bi-lingual but indicate the sentiment of those who feel that we are getting migrants who have no desire to integrate into our Australian society. Our main language is English and if you cannot speak English then it is difficult to become integrated into our society.