As I mentioned before, I was selected to be the judge of the 2010 PUK Awards run by iOwnTheWorld.

Twenty five images were selected from the nominees, and from those 25, I selected a winner and 9 others to round out the Top 10.  There were many good ones which did not make the Top 10.  Not surprisingly, most of the images related to Obama.

If there were a method to my madness, it was to pick images which caught the essence of Obama in a subtle yet effective way.  Exposing and mocking Obamamania counted for more than visual name calling.

And the winner is … the “Shovel Ready” image by Hippie Critic of iOwnTheWorld.

To me this was an absolutely brilliant compilation, and far and away my favorite.  The image plays upon so much of what has gone wrong the last two years, from the now-discredited notion of “shovel ready” stimulus projects to the dead-and-buried lovefest epitomized by the iconic Obama Hope poster and “Change We Can Believe In” slogan. 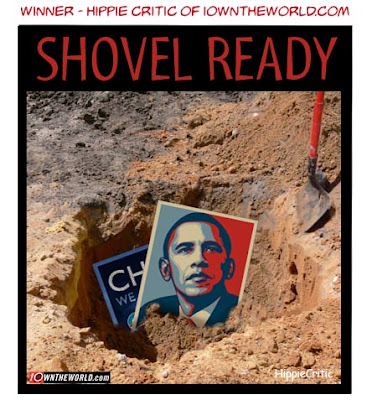 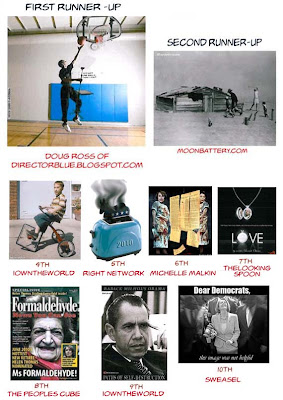 You can view all the images in more detail at iOwnTheWorld.

Thanks for the honor of letting me play judge.  I now have more judicial experience than Elena Kagan did when she was nominated to the Supreme Court.

As my final non-appealable ruling before leaving office, I declare that the health care mandate violates the Constitution’s “Leave Us Alone” Clause.

This is a real honor, especially in light of all the great great entries. Thank you so much.

Sweet! I'm honored one of my pieces made it to the top 10. This totally made the rest of my year! 😀