I saw this coming from a mile away (actually, 17 months away).  I wish I had bet big money against this prediction made in June 2009:

Anyone want to bet that there will be a cover story somewhere next year calling Obama the deficit killer?

The prediction was by Stan Callender, who describes himself as follows:

Collender is an acknowledged expert on the federal budget and congressional budget process and the author of The Guide to the Federal Budget, which was published for 19 consective [sic] years from 1982 to 2000 and was one of the most-assigned text on the topic. He is one of a very limited number of people who has worked on the staffs of the House and Senate Budget Committees and founded and edited Federal Budget Report, a newsletter that was published for almost two decades. For 11 years he wrote a weekly column (“Budget Battles) for NationalJournal.com. For the past three years he has written “Fiscal Fitness” for Roll Call. He is currently a partner at Qorvis Communications, where he spends most of his time working with financial services clients. Stan is also a much sought-after speaker to business and other groups on federal taxes and spending, appears often on television and radio, and is frequently quoted in major print publications.

Collender’s anaylsis was the basis for Matthew Yglesias, who blogs at Think Progress, writing the post Barack Obama, Deficit Slayer (emphasis mine):

As the economy recovers, tax revenues will rise, social safety net outlays will fall, and stimulus measures will begin to tamp down. If we can assume further growth in 2011, the complete expiry of Recovery Act provisions, and the winding down of the Iraq War, that’ll be further deficit reduction. On the merits, people would still do well to be concerned about the deficit further out when, in the absence of structural reform of the health care sector, Medicare costs will bury us all. But in the short term, things are going to look worse than they really are in 2009 and then look better than they really are in 2010. And of course people vote in the even-numbered years.

To which I responded as follows:

… for crying out loud.

But what did I know, I’m not an economist or a highly trained political analyst.  And I don’t even read so good:

But I do know humor when I recognize it, and this image which accompanied the Yglesias post still makes me laugh: 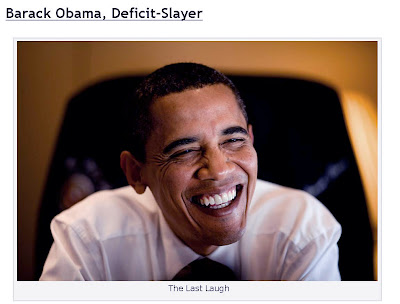 Unfortunately, we all are paying the price.

So far in this second year of democratic budgets the monthly deficits are on average larger than the annual yearly deficit of the Bush regime. Keep drinking the Kool-Aide Tim.

Previous post revised to take out an unnecessary slam against a gracious host:

We both got our information from the same source, USA Today. The difference is that my information is the latest (October), while yours from February, when it was still an estimate:

The budget deficit for the fiscal year that ended Sept. 30 was just under $1.3 trillion — and that's good news, in a way, for President Obama.

After all, this was the first full fiscal year of his presidency. The record $1.4 trillion deficit for the 2009 fiscal year began accumulating Oct. 1, 2008, when George W. Bush was still in office. So the red ink is finally fading a bit.

The latest estimates are courtesy of the Congressional Budget Office, which earlier this year projected the 2010 deficit at $1.34 trillion. It came in at $1.29 trillion — $50 billion less than anticipated, due to higher corporate tax revenue and lower spending on bank and other financial institution bailouts.

That's still 8.9% of the nation's economy, a huge number that Obama hopes to reduce to about 5% by the middle of the decade. But it's less than 10%, the portion of the economy represented by the 2009 deficit. Those are the two worst deficit levels since 1945.

Bob, your post is off-topic. You are comparing monthly averages against the entire Bush years. The point of Bill's post is whether the deficit is going up or down from 2009 to 2010. As the facts (not Kool-Aid) show, the deficit has gone down.

Nice work, Aaron, aka AW. You brag about your prediction when the rest of us heard the man actually talk about his desire for deficit reduction in the 2010 State of the Union! Cutting edge, dude, cutting edge.

Still, I'd love to hear more lectures from conservatives about how much they care about the deficit right after they argue that we should borrow 700 billion over the next ten years to finance their tax cuts.

Two political parties argue they want a balanced budget. Only one has accomplished in the last 30 years and that was the one who raised taxes in 1993. Freakin' hypocrites is what Republicans are.