The Definition of Disappointment

The Definition of Disappointment 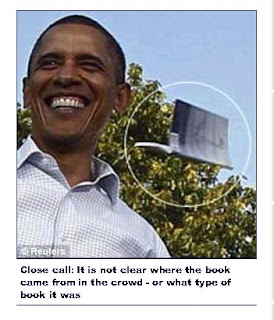 You know the mainstream media and left-wing blogosphere were hoping…

… that it was a Bible thrown by a Glenn Beck worshiping Tea Party activist who belongs to a militia, and dresses up as a Confederate Soldier on weekends in fields near his double-wide trailer which is heated by burning Korans, where his teenage wife home schools their uninsured barefoot kids about creationism and preaches abstinence-only sex education at the fundamentalist church on Sunday mornings after taking her turn screaming “baby killers” outside the only remaining abortion clinic in the state, who traveled to the rally in his V-8 pickup truck with a shotgun in the rear window, which he purchased at a gun show from a fellow sovereign citizen, and who refuses to pay income taxes because the Tenth Amendment says nothing about taxes, and who thinks Obama is a Muslim who was born in Kenya and brought to the U.S. by George Soros after undergoing extensive brainwashing in Manchuria, all of which he learned by reading wingnut blogs, listening to Rush Limbaugh, and watching FoxNews.

Alas, it was only an “overexuberant” Obama supporter who wanted The One to bless the book.

(Image via The Daily Mail)

Ok, so I personally don't have the time (though I would love to make a contribution to this Blog), but someone should Peruse Amazon.com and check covers against the one shown in the photo.

Start with leftist political manifestos, and then head towards the middle (you'll find it before then I'm sure!)

I love my brain….

I sat down from starting dinner, and read "You know the mainstream media…."

Here's what it said to me: "You know the mainstream mafia…."

Dang that's a good sentence, Professor. And LOL, thanks for solving the mystery, William.