Reporting From Ithaca: Is Maurice Hinchey Really In Trouble?

Reporting From Ithaca: Is Maurice Hinchey Really In Trouble?

Could this be the year in which I completely shed myself of the dubious distinction of splitting the year between Congressional Districts controlled by Patrick Kennedy and Maurice Hinchey?

We know Patrick is gone, but are recent reports (via HotAir) of Hinchey’s demise accurate?

First, some background on Hinchey.  Hinchey is in that deep corner of left field occupied by Dennis Kucinich and Alan Grayson. Hinchey led an effort to impeach George W. Bush in the Summer of 2008, when Bush was just a few months away from leaving office anyway.   Hinchey has accused the Bush administration of “intentionally” letting Osama bin Laden go free at Tora Bora in December 2001, so as to justify the war in Iraq (which was launched in March 2003).

In other words, Hinchey’s perfect for his heavily gerrymandered district which covers Binghamton (home to a large state university) and Ithaca, home to Cornell University, Ithaca College, and a heavily left-wing population.

Second, a report on internal polling from Hinchey’s Republican challenger, George Phillips, indicates the race is in single digits.  As reported in The NY Post:

For a sense of how big the Republican wave may be on Election Day, consider a normally safe Northeastern Democrat — Rep. Maurice Hinchey (D-Ulster), a liberal who’s held the seat since 1992 and never faced serious opposition….

But this year might be different for Hinchey. His challenger is George Phillips, a bright, charismatic conservative from Binghamton who knows both the Congress and the district. A former staffer for Rep. Chris Smith (R-NJ), Phillips now teaches history at a Catholic school in Binghamton.

A recent internal Phillips campaign poll showed the gap between the two to have narrowed to seven points, 44 percent to 37 percent — with Hinchey leading, but below the 50 percent mark, a bad place for any incumbent to be.

Worse still for Hinchey, 19 percent were undecided. They’re not undecided about him (not after his 18 years in Congress), but waiting to hear more from his challenger. And so far, the more they know, the more they like Phillips.

I had heard about this polling even before The Post article.  While I have no way of judging the credibility of the poll, it does seem to be backed up by the fact that Hinchey has started seeking help with his campaign from outside the district, including bringing in Bill Clinton.

Third, your humble correspondent, reporting from Ithaca, notes the following:   There is almost no sign that there really is a congressional race this year, which is unusual for a place where people don’t hesitate to tell you what they think.  As I noted back in November 2008:

To live in Ithaca is to live in a city alive with anti-Bush, anti-war protest.  I often joke that the directions to my house in Ithaca  read as follows:  Take a right at the fifth Obama sign, a left at the third “Impeach Bush” placard, bear right at the “Support Our Troops, End the War” poster, and we are the house just after the “There’s a Village in Texas Missing its Idiot” banner. 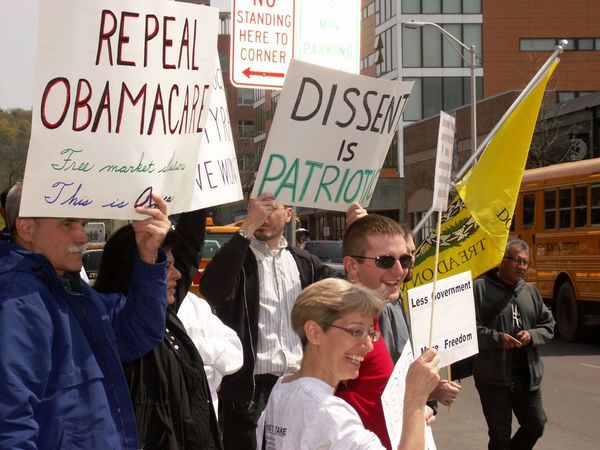 But not a Maurice Hinchey sign is sight.  You are more likely to see a small group of Tea Party activists holding signs near the Commons (image) than the usual suspects.

I can’t predict voter turnout, but I can predict that the liberal base is not motivated.

Perhaps it is the fact that people in Ithaca, reputedly “10 Square Miles Surrounded By Reality,” are beginning to notice reality.

The economy is more stable here than elsewhere, but still not good.  Cornell University is into its second year of a sweeping restructuring meant to cut costs, which has included a staff (but not faculty) hiring freeze.  New York State is a financial disaster, and the Ithaca City and School budgets are under pressure due to state cut-backs, which only will get worse.

I also sense Obama fatigue.  Admittedly, it’s just a sense.  But it’s real.  There just isn’t any fervor left in the tired bones of the 60’s generation and its carefully-nurtured progeny.

[Note:  I just donated to George Phillips.  How about you?]

——————————————–
Related Posts:
Now You Can Feel Sorry For Me
A Place Where Only Liberal Speech Is Protected
Pro-Military Protestor Throws Shoes At Socialist Mayor

I have been a volunteer for George Phillips since last spring here in Orange County (I first met him at a Meet & Greet last Nov.) – he is the real deal! I'm doing phone-banking and door-to-doors and the responses are VERY positive. It's actually very tough to find anyone who LIKES Hinchey, but he certainly has schmoozed and bribed a LOT of elderly folks. Even so, a number of elderly are very enthusiastic about voting for George. His events around this district have been numerous and positive.

When I first moved to the Hudson Valley in 1995 I was a flaming liberal and still was shocked at how this area (NOT far-lefty other than the enclaves of New Paltz and similar areas) could elect such a rabid Marxist. Art is right; the NY Republican Party is braindead for the most part. It's the Tea Party groups around the state that are reviving conservatism here – the Republican Party has done just about all they can do to undermine and foil us, very much as they have in other parts of the country. That's why this is not a junior partnership on our part but a hostile takeover…

I'm in a very activist Tea Party group that spans parts of NY-22 and NY-19 so I know a lot about John Hall and Nan Hayworth, too, and attended a debate. It's extremely encouraging to think we could fire both Hinchey and Hall and send Phillips and Hayworth to D.C. in 22 days. We volunteers are not letting up – we're doubling down!

Professor, Hinchey has been fundamentally vulnerable for decades. He initially go a House seat and was reelected in flukey situations after which he has been reelected largely because the GOP in NY has been dead for years. Sure, gerrymandering hus district to embrace as many Dems as possible was important but overall, the population of voters is far less liberal than Hinchey. Add a good GOP candidate for once, along with the Tea Party and the enthusiasm gap, and it's the race of Hinchey's life,

Thanks for the news on Hinchey!

I am just catching up here, and do not know if you aware of the growing number of competitive contests downstate. In addition to CD1 (Eastern Suffolk: Bishop v Altschuler) and CD13 (Staten Island/SW Bklyn: McMahon v Grimm), add CD4 (SW Nassau: McCarthy v Becker).

Also interesting are the CDs where the incumbents are actually being forced to campaign:
CD9 (a more conservative swath of Queens and Brooklyn than most realize: Weiner v Turner), CD4 (Western Suffolk: Israel v Gomez),
and CD14 (UEastSide/Astoria/LIC: Maloney v Brumberg).
I expect CD5 (NW Nassau: Ackerman v Milano) might heat up after Ackerman's J-Street fundraiser…

My prediction is that the competitive CDs and State Senate contests will drive turnout, and that might affect (some of?) the statewide contests, with Long island and SW Brooklyn being critical.

My big question is whether Schumer's denial of Jay Townsend's existence will backfire into the October surprise for New York.

Birdalone, Jay Townsend has done very little real campaigning around the state. Tea Party groups vetted him and like him a lot (I liked him but preferred Berntsen, who seems like he could kill a terrorist bare-handed without breaking a sweat), but he's not a fighter. His polls are dreadful. I actually saw the first Townsend yard sign a couple of days ago. His campaign is not doing the job, and he's gotten virtually no press.

OTOH, Joe Dioguardi (whom I also like though I preferred the fiscal whiz Malpass) has a real chance to unseat Schmucky's Mini-Me (aka Dingy Harry's hottie), Gillibrand, who is simply dreadful. Dick Morris is very high on Dioguardi who (unlike most Tea Party candidates) is a politician and a known entity.

The answer to the question presented by this article is YES!! The citizens of NY would be in more trouble if Mo is re-elected. It's time for Mo to go. Let him retire in the real world instead of the lala land he helped create in DC.