The comparison of the long-shot campaigns of Scott Brown and Christine O’Donnell frequently draws the objection that Brown was viewed as a serious and moderate candidate, whereas O’Donnell is viewed as a non-serious extremist.

As someone who followed the Brown campaign closely, I can tell you that this perception is wrong as to Brown.

Once they woke up from their December 2009 slumbers, the Martha Coakley campaign, Democratic Party operatives, and the left-wing blogosphere went after Brown just as viciously as Castle and Coons supporters went and are going after O’Donnell.

Brown was treated much as O’Donnell is being treated now, as a joke, unqualified, likely racist, homophobic, and a host of other epithets.

The current view of Brown, which has taken hold over the past 9 months, has replaced the reality of what went on in January 2010.

Sorry to burst your memory bubbles, folks, but here are some facts about how Scott Brown was treated: 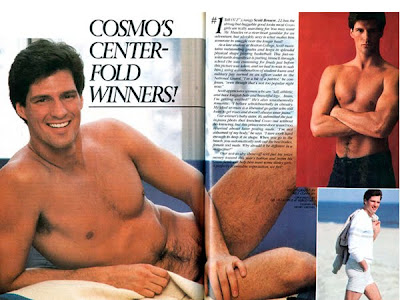 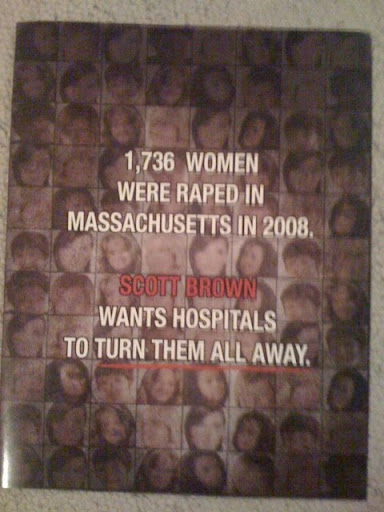 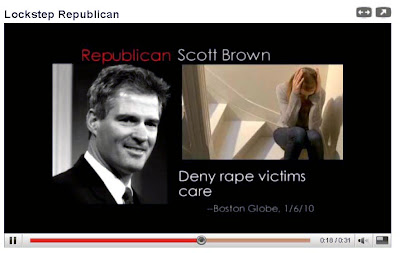 Here is how Keith Olbermann summed up the catalog of Democratic Party attacks on Brown as a fringe extremist (substitute O’Donnell for Brown, and the resemblence to current attacks on O’Donnell is uncanny):

Scott Brown came to be viewed as moderate, but not because he was treated as moderate by the Democrats or the media which breathlessly reported each accusation.  Only after the statewide debate in which Brown coined the now-famous “It’s the People’s Seat” line did many pundits and others jump on the bandwagon.

The dismal polling for Brown was a trailing indicator, which did not pick up what was happening on the ground.  On January 4, 2010, just two weeks out from the election, a Boston Globe / University of New Hampshire poll found Brown down by 15 points.  On January 5, 2010, numbers “guru” Nate Silver predicted that Brown had little chance:

Rasmussen is supposed to have a poll out tomorrow (Tuesday) on the Massachusetts Senate Special Election, which will take place on the 19th. There’s been some speculation, mostly from Republican blogs but also from some Democratic analysts, that the Republican candidate, Scott Brown, might have a chance, which would potentially wreck the Democrats’ chances to pass health care reform

I’ll be curious to see what Rasmussen and the other pollsters (PPP? Suffolk?) have to say, and bears remembering that special elections are highly unpredictable affairs. But I’d be somewhat surprised if the election turns out to be especially competitive.

It was not until the Rasmussen poll came out showing Brown down by 9 among likely voters but down only by 2 among “definite” voters that people began to think a Brown victory even was possible.

It was the surprise of the Brown victory which led Democrats to fine-tune the messaging and create the strategy of crazy, whereby Republicans, particularly those backed by the Tea Party (like Brown) would be portrayed as extremists.

The lesson learned by Democrats was that Brown was not attacked early enough to form an extremist and crazy image in the public mind.  As Dave Weigel explained at the time:

A reporter/blogger for ThinkProgress who asked Brown uncomfortable questions only arrived on the trail 24 hours before the election, too late for videos of Brown trying to explain, for example, a vote against financial assistance for Red Cross workers assisting in post-9/11 efforts, to have any impact. A video of the viral curling iron” story backfiring on Brown as a supporter yelled a crude remark about Coakley also appeared too close to the election, after the momentum was sealed.

Sure, no two races are identical, and Brown had much in his background — such as military service and a daughter who was an American Idol star — which O’Donnell does not have.  And Brown did not have to endure the types of attacks from his own party establishment as has O’Donnell.

But the narrative of Scott Brown being treated as a serious mainstream candidate by the Democrats and the media is not accurate.

O’Donnell has a steeper climb, because so much damage has been done by fellow Republicans, and the Democrats are not asleep at the wheel this time.

The race will turn on whether in the next 6 weeks O’Donnell can put her new-found campaign treasure to work redefining herself and refocusing the campaign on issues and Chris Coons’ history of tax increases and budget deficits.  Just as Brown was the 41st Vote — nationalizing the campaign — so too O’Donnell must nationalize the campaign around the issues.

O’Donnell’s appearance on Hannity last night was a good first step.  O’Donnell will not be treated fairly by the national mainstream media no matter what she does, so she is better off sticking to local and state media to get her issues-oriented message across.  This will raise the cackles of those who want to take her down, but why should she care about them anyway?

My point is not that history repeats itself in identical form, but that in an emotional electoral season in which Republicans are united, independents are moving towards Republicans, and even Democrats have doubts, someone on the good side of the wave can make up ground very quickly.

There is a televised debate on October 13.  Will that be O’Donnell’s “It’s the People’s Seat” moment?  Will that be the moment when everyone says what now seems impossible is possible?

Does O’Donnell face an uphill fight at this point?  Yes.  Is it over? No.

——————————————–
Related Posts:
Please Ignore History and Give Up On Delaware
Another Case Study In Media Bias (Delaware Edition)
Memo to the Right: “The Lombardi Rule” Is In Effect

Everyone knows that faced with having to choose between a conservative or a Marxist, voters will always choose the Marxist. At least, that is what the GOP establishment is peddling.

Look, O'Donnell is on the line because she is preceived to be running for the seat of the "50th" senator. After all the smoke has cleared, and the GOP has taken all the GOP-leaning races, a couple of races will decide who controls the Senate, and Delaware is one of them. So, poor lady, the beatings will continue until November 2.

On the other hand, the working majority for the Senate is 60, not 50, but I guess there are some perks in having the majority.

Good for O'Donnell this is her 3rd race, so she's been sailing with the wind in her face for years. Also, there are 33 Senate races, the MSN in lockstep seems to be able to blast away at one at a time (go figure how that is arranged). All the other campaigns get the pass while O'Donnell takes the shelling.

That being said, you can smell panic in the air when all the MSN goes negative the day after the primary. (again, how was that arranged?) Too early, time to shrug and focus on the big very dismal state of the country. And O'Donnell seems to be doing fine in the interviews I've heard, she now has buckets of cash for little Delaware, and the tide is definately coming in.

If she wins, watch her get barely a word of press.

Too right, they painted Brown as a lunatic nutjob extremist (or you know, tried to), but what Brown did that Angle and O'Donnell need to do is stay on message. Responding to the lunacy is not a good idea (or doing so with dignity, as Brown did in his kitchen ad, may be okay, but selectively, not at everything said).

The common factor of all winning republican long-shot candidates from NJ to VA to MA has been rising above the slime and muck thrown at them, not going negative, and staying on message. These women need to do that if they hope to win.

Epic – you sire, are a master. This is brilliantly done and deserves to go viral!

The comparison breaks down, however, when you actually compare Scott Brown's bio with Christine O'Donnell's. While the MFM might have strained mightily to portray Brown as a nut, he has a fairly impressive bio to fall back on in his defense. I have no idea whether or not Christine O'Donnell is a flake or not, but there's certainly plenty of raw material there to make it difficult for her to shrug off that line of attack.

Also, I have to say it's a very sorry day when bogus cries of "sexism" and identity politics become a go-to tool for people who claim to be conservatives. Don't we get enough of that from the Left?