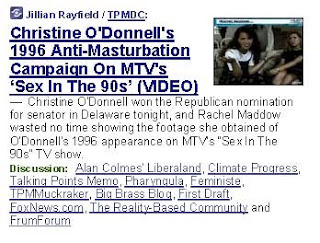 The pretext for sexualizing O’Donnell was a 1996 video in which O’Donnell was interviewed about her conservative Christian views on sex.

Before Maddow’s post, the subject mostly was the subject of left-wing bloggers, but Maddow took it mainstream on MSNBC’s primetime coverage.

An almost 15-year old video was all the excuse Maddow needed to take the story national.  Because the fate of the nation turns on whether O’Donnell masturbates, at least to Maddow.

One can understand why Alan Colmes would get all excited about the subject, but why the person who runs the liberal feminist blog Feministe? 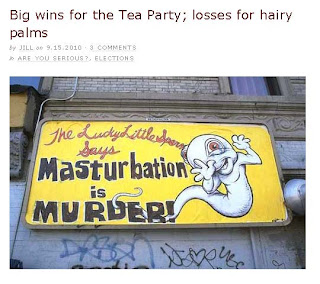 Because liberal feminism is dead, and has been for years.

Liberal feminism began its death spiral no later than when Democratic Party loyalists defended serial abuser Bill Clinton and demonized his victims (right around the time of O’Donnell’s interview, as coincidence would have it).

The liberal feminist death march has continued through the sexualized attacks on Sarah Palin and other conservative women in more recent times.

But, it’s not like I didn’t see this coming.

Update:  The always classy NY Times starts off its headline article hit piece about O’Donnell’s win with this paragraph:

“Put Your Laws All Over My Body”

Midwest av said "And besides, moderation is much safer than abstinence for individuals"
Can this be true? Doing something only sometimes is safer than doing something never?
Just out of curiosity, how do std rates in todays permissive society compare to the more rates before the 60's? How can you claim that abstinence doesn't work when there's only one story that I could find where an abstinent women ended up pregnant? I bet it's just as effective at disease prevention.

I'd feel better about O'Donnell if she'd ever won anything done anything beside run for office that demonstrates leadership ability. So far, all I can see her running on is her good looks.

Big surges like this in either direction are great for opportunists. I just hope that she's got more than just a naive "wouldn't it be neat" wish to win an election.

Midwestern Avenger, hers is one vote and voice in the entire senate, and on this one particular sexual issue, how much leverage is a freshmen senator actually going to have?

Also, the higher rate of STDs, pregnancies and abortions? You would be right to blame that at least in part on the more liberal view of sex education in today's society. Abstinence, you'll recall, is 100% effective in preventing all of those things. Easier said than done, but it's definitely something to strive for.

Wait a second, what? You can't criticize O'Donnell's clearly antifeminist views and be a feminist?

While we're playing "enemies of the group define the group," you can't criticize a TV talk show host and be a conservative. Why? Because I declare it so.

Pashley said:
"One would wish that Ms. Maddow would express her sexual energy in a more private forum and, perhaps, get laid more often.

Here is the Left: Identify, Personalize, Demonize. Rinse and repeat. There is no poilcy, there is no arguing."

Did you read your own comment before posting? The first two sentences are and example of your last three paragraphs. Guess it's not just the Left that your observation applies to, huh?