The image on The Washington Post [see note below] website of the Restoring Honor rally today in Washington, D.C., reminded me of the advertising concept of subliminal seduction, where images are inserted into an advertisement in such a way as to send a message to the viewer without the viewer knowing it.

WaPo’s article about the rally carried a time stamp of 1:38 p.m., but the photo of a near empty crowd in front of the Lincoln Memorial clearly was taken long before the tens or hundreds of thousands of rally participants arrived.

The caption says “Glenn Beck Rally Draws Thousands,” but the photo is not of the rally.

[Note:  WaPo has updated the linked article, and as of 9:03 p.m. has a different photo and more photos showing the crowd.  The screenshot above was taken at 1:38 p.m., and the same lead photo and image was on the website at least until after 2 p.m.  Considering that the rally started at 10:00 a.m., at which time the area was packed, there was no excuse for WaPo using that photo for several hours.]

Update:  Here’s what the crowd-shot looked like during the rally (Via):

Update 8-29-2010:  Thanks to Ed Driscoll for this photoshop (those of us who read the original are dating ourselves).  Subliminal Seduction was all the rage in the 1970s: 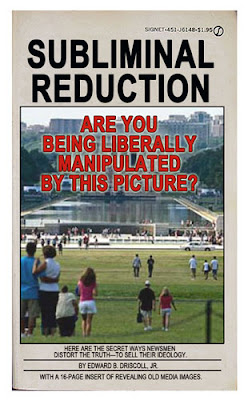 @PaperTiger…
PRM? Brilliant ! its not only true… but it hits back at the real liberal racists who see everyone.. and anyone who disagrees with modern day liberalism as bigoted.

The only thing that the Tea Party movement now needs is a rock anthem :=)

Me thinks Rising Power – AC/DC would do justice :=)

Holy crap, are you people paranoid.

Something's happening here,
What it is, ain't exactly clear…

Wow, a bit sensitive here about references to the whiteness of the crowd? Here's why race was relevant when reporting on this rally: a) the date chosen was the anniversary of MLK's "I Have A Dream" speech and b) Beck's stated goal was to 'reclaim the civil rights movement' (for whom? from whom?). One cannot invoke MLK and the civil rights movement without also invoking race, and it is certainly notable and of interest that a predominately white crowd would gather on the Mall to do so.