On Saturday night, August 14, Instapundit kindly linked to my post, which lit up the old SiteMeter with plenty of out clicks to the Coffee Party website; many other blogs linked to or ran with the story.

At some point on Sunday, August 15, the original post was removed from the Coffee Party website, and readers now see this:

But not to worry, I figured this would happen, so before running my post I captured the original post: 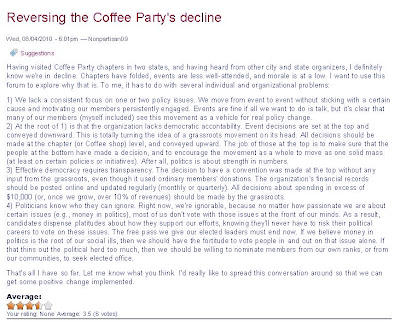 Here is the full text of the post (highlights are mine):

Having visited Coffee Party chapters in two states, and having heard from other city and state organizers, I definitely know we’re in decline. Chapters have folded, events are less well-attended, and morale is at a low. I want to use this forum to explore why that is. To me, it has to do with several individual and organizational problems: 1) We lack a consistent focus on one or two policy issues. We move from event to event without sticking with a certain cause and motivating our members persistently engaged. Events are fine if all we want to do is talk, but it’s clear that many of our members (myself included) see this movement as a vehicle for real policy change.

2) At the root of 1) is that the organization lacks democratic accountability. Event decisions are set at the top and conveyed downward. This is totally turning the idea of a grassroots movement on its head. All decisions should be made at the chapter (or Coffee shop) level, and conveyed upward. The job of those at the top is to make sure that the people at the bottom have made a decision, and to encourage the movement as a whole to move as one solid mass (at least on certain policies or initiatives). After all, politics is about strength in numbers.

3) Effective democracy requires transparency. The decision to have a convention was made at the top without any input from the grassroots, even though it used ordinary members’ donations. The organization’s financial records should be posted online and updated regularly (monthly or quarterly). All decisions about spending in excess of $10,000 (or, once we grow, over 10% of revenues) should be made by the grassroots.

4) Politicians know who they can ignore. Right now, we’re ignorable, because no matter how passionate we are about certain issues (e.g., money in politics), most of us don’t vote with those issues at the front of our minds. As a result, candidates dispense platitudes about how they support our efforts, knowing they’ll never have to risk their political careers to vote on these issues. The free pass we give our elected leaders must end now. If we believe money in politics is the root of our social ills, then we should have the fortitude to vote people in and out on that issue alone. If that thins out the political herd too much, then we should be willing to nominate members from our own ranks, or from our communities, to seek elected office.

That’s all I have so far. Let me know what you think. I’d really like to spread this conversation around so that we can get some positive change implemented.

In addition to the point made in my original post about the Coffee Party declining, notice how the author is complaining about top-down decision making and use of donations without accountability.

These Coffee Party supporters really are naive, and are just beginning to understand that their good intentions are being used by professional organizers to create the appearance of a grassroots movement in support of Obama’s agenda.

Have you people ever read Animal Farm? Or don’t they stock that at the Coffee Party bookstore?

This post should be updated. The thread on CoffeePartyUSA is on the site, but with a new title: Sept. Convention: Reversing Coffee Party's decline. Find it here: http://www.coffeepartyusa.com/content/sept-convention-reversing-coffee-partys-decline

Unfortunately, this new title perverts the original meaning of the post, and probably draws new people away from posting there. (This is on top of the fact that the name-change has caused all the old links to it to break.) In any case, there is still no official word from the Coffee Party moderators as to why this is.