From The “Democrats Wouldn’t Dare” File

From The “Democrats Wouldn’t Dare” File

Nothing would surprise me anymore.

Some are expecting an “August Surprise” in which Democrats would propose that Fannie Mae and Freddie Mac write off hundreds of billions in mortgage debt owed by people who are under water (i.e., they owe more than the house is worth).

Call it the Mother of All Walking Around Money, or a pre-election voter appreciation Stimulus:

Main Street may be about to get its own gigantic bailout. Rumors are running wild from Washington to Wall Street that the Obama administration is about to order government-controlled lenders Fannie Mae and Freddie Mac to forgive a portion of the mortgage debt of millions of Americans who owe more than what their homes are worth. An estimated 15 million U.S. mortgages – one in five – are underwater with negative equity of some $800 billion. Recall that on Christmas Eve 2009, the Treasury Department waived a $400 billion limit on financial assistance to Fannie and Freddie, pledging unlimited help. The actual vehicle for the bailout could be the Bush-era Home Affordable Refinance Program, or HARP, a sister program to Obama’s loan modification effort. HARP was just extended through June 30, 2011.

The move, if it happens, would be a stunning political and economic bombshell less than 100 days before a midterm election in which Democrats are currently expected to suffer massive, if not historic losses. The key date to watch is August 17 when the Treasury Department holds a much-hyped meeting on the future of Fannie and Freddie.

I knew I should have bought that Big, Unfair House.

Rumors aside, I still don’t see this happening. While 20% of mortgages are under water, 80% are not, and this bailout would piss off the 80%.

And as we know, the Democrats would not dare pass legislation opposed by a clear majority of Americans.

Update:  After this post, I decided to check on how the Big, Unfair House was doing.  Looks like the cabinets are being delivered, and the brickwork has arrived: 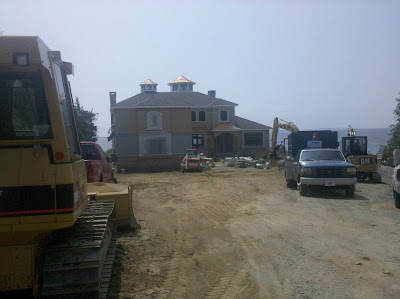 Maggot: financial eggs are so scrambled already that it is hard to say what will happen. As it is, it looks like the Feds will be rigging the bond market for eternity and non-hedge fund (high-frequency traders) trading volume on the stock exchanges is down 70-80% from three years ago with so sign that investors are coming back.

We need our financial markets if our economy is going to work efficiently. As things stand, everything is upside down due to government capriciousness and the cynicism and uncertainty that comes with that.

You can't keep a patient under sedation forever. There is only some much operating a surgeon can do. Comatose can be worse than dead.

They can write me as many checks as they want, but I'm still not voting for them.