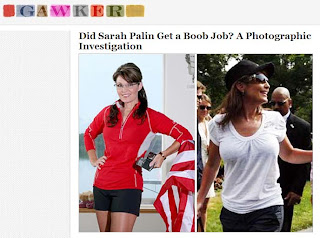 I would like to pronounce the left-wing mockery of Sarah Palin’s supposed breast enlargement surgery as the final nail in the coffin of liberal feminism.

But there are no nails left.

They all have been used in prior liberal misogyny directed at Sarah Palin.

and Greta, Breast Implants? Palin? Have you seen the feminists? Where are they?

I'm waiting for Andrew Sullivan's next psychotic break on the subject of Sarah, and the breast-thing will drive him closer to terminal clinical nutjobbery. BTW, there are now bras which enlarge, uplift, and otherwise improve the appearance of young women in t-shirts—my 21-year old model daughter tells me. [She models for an agency, as well as being a great kid.]

Tina Brown's Feminazi coda to her failed career stateside suggests she should retire back to Blighty for rehab on both mental and physical fronts. The New Yorker staff still snicker at this tart's wanting to put lipstick on their pig!

She didn't have work done. It's a freakish camera shot. Here's a pic from that same day courtesy of Michelle Malkin – http://michellemalkin.cachefly.net/michellemalkin.com/wp/wp-content/uploads/2010/06/palin2.jpg

I had a similar freakish picture taken when I was about 20. I still have it. You don't throw those things away. 🙂

Did anyone think that a nursing mother's breasts might be naturally enhanced? Unheard of, I know, but it lies within the realm of possibility.
Moreover, with all those 24/7 coverage of Palin, how she'd be able to get into a hospital for such surgery without a single telephone call from SEIU members to their dem operative friends, would be impossible.

They all just envy her… As for me, I envy her husband!