A New Day, A New Accusation Against Sharron Angle

A New Day, A New Accusation Against Sharron Angle

Every few days we are seeing some accusation made by Harry Reid’s campaign operatives which makes its way into the blogosphere and mainstream media. Today the meme is that Sharron Angle is refusing to state her position on Obama’s citizenship.

Once again, the lead is being taken by Greg Sargent, who blogs at The Washington Post, who also has been leading the charge to paint Sharron Angle as extremist and potentially violent.

Now Sargent levels the Birther charge in a backhanded manner. Sargent doesn’t actually claim that Angle believes Obama was not born in Hawaii, yet the title of his post is Report: Sharron Angle won’t say whether she’s ‘birther‘.

Notice the word “report” in the post title, along with “won’t say.” That is the key. Sargent is highlighting a report elsewhere which amounts to nothing more more than a failure of the Angle campaign to return a call from a reporter in Nevada on the subject.

And what was the source used by the reporter? None other than a “progressive” blogger, who along with Harry Reid’s campaign and the Nevada Democratic Party, is pushing the meme that because Angle was endorsed by a group which questions Obama’s citizenship, Angle must be a “Birther.”

Here is the video clip of the “report” on which Sargent bases his post:

Since when is a campaign’s failure to return a phone call sufficient to create a story that a candidate “won’t say” something?

It is even more irresponsible because Angle already has agreed to a face-to-face interview next week with the reporter in question, at which point the reporter can question Angle about her views on the subject. 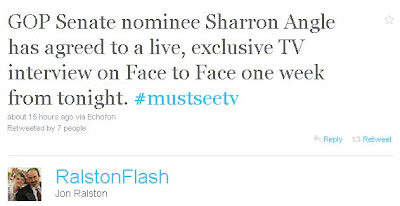 Also, an endorsement does not mean that Angle subscribes to everything an endorser does or says. Here is the actual language from Angle’s campaign website about the group, the Declaration Alliance PAC:

Sharron Angle went to court five times to defense of the Nevada Constitution. No other candidate in this senatorial race, including Harry Reid, has that record. As a result of Sharron Angle’s dedication to constitutional law, she has been endorsed by Declaration Alliance PAC.

Angle’s campaign has denied sharing the group’s views on Obama’s citizenship, as the Nevada reporter has noted (Sargent’s post is the link in the tweet below): 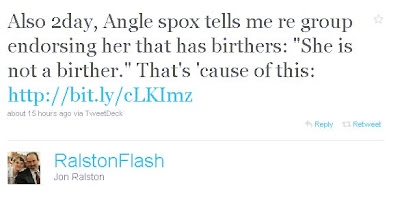 This is exactly the tactic used against Scott Brown by the left-wing blogosphere, as I documented in my post Coakley Supporters Fabricate Birther Accusation Against Brown.

Sargent isn’t alone in using this tactic against Angle, as HuffPo is running a similar post, and now the meme is spreading in the left-wing blogosphere.

Angle’s campaign is not yet equipped to respond promptly to Reid’s campaign tactics, because she had almost no campaign infrastructure as of primary day.

Angle needs to build that infrastructure quickly, because Harry Reid doesn’t have a record on which he can run, but he does have the mainstream media and left-wing blogosphere doing his bidding.

Update 7-2-2010: So will Sargent now rescind his insinuation?

I asked her “flat out” whether she believed Barack Obama was born somewhere other than Hawaii, and she replied, “No. Is that flat-out enough for you?”

The question of Obama's eligibilty is whether he is a Natural Born Citizen, not whether he was born in Hi. Natural Born Citizens, as defined in dicta of a number of SCOTUS cases, are those born in the US of US Citizen parents. SCOTUS has NEVER defined it as anything less. Obama has already admitted the fact that makes him ineligible, his father was Kenyan, and imparted British Citizenship upon him through the Bitish Nationality Act of 1948.