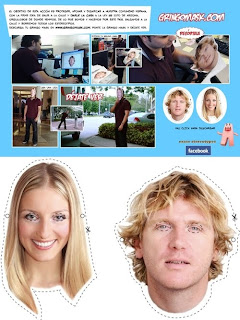 Gringomask.com appears to be a real, not spoof, website in protest against the Arizona immigration bill. (h/t)

The site proposes that as a protest people wear a mask featuring a blond-haired white person’s face (image right). According to the website:

The objective of this action is to dignify and support the Hispanic community, with the firm intention of taking it to the streets and confronting Arizona’s statute SB 1070. Proud of where we come from, and what we do and are for this country.

These people need lawyers, not masks.

Because wearing a mask in public is illegal in many states, so the wearing of the Gringo Mask in and of itself would be grounds to be stopped by the police (and a resulting identity check?).

In many states, these laws grew out of the desire to have a legal basis to prohibit the wearing of hoods at Ku Klux Klan rallies. In New York, interestingly, the law “can be traced back in substance to legislation enacted in 1845 to thwart armed insurrections by Hudson Valley tenant farmers who used disguises to attack law enforcement officers.” (Citation, at 10)

New York Penal Law § 240.35(4), which has been upheld by the federal Court of Appeals (in a decision in which now Justice Sotomayor participated) makes it an offense of “loitering” for a person to be masked in public:

Being masked or in any manner disguised by unusual or unnatural attire or facial alteration, loiters, remains or congregates in a public place with other persons so masked or disguised, or knowingly permits or aids persons so masked or disguised to congregate in a public place; except that such conduct is not unlawful when it occurs in connection with a masquerade party or like entertainment if, when such entertainment is held in a city which has promulgated regulations in connection with such affairs, permission is first obtained from the police or other appropriate authorities.

Here is a list (a/o 2005) of states which criminalize the wearing of masks (Arizona is not on the list, having repealed its anti-mask law in 1978).

I wonder, though, whether in states like Arizona where it is not illegal to wear a mask, the wearing of a mask combined with other factors, e.g. walking into a bank, could provide grounds at least to question someone.

So while “driving while brown” or “looking Hispanic” or any of the other alleged grounds for racial profiling remain illegal as a basis for stopping and questioning someone, wearing the Gringo Mask could be a lawful ground in many states for a police officer to question someone.
The Gringo Mask, another bad idea gone bad.
——————————————–
Related Posts:
Dem. Legislator Files Arizona-Like Immigration Bill in Rhode Island
Leadership by the Wilfully Ignorant
Do NOT Read This Supreme Court Decision

from a f'ing gringo …

Get the hell outa my country!! Illegal means you are breaking our laws… in ENGLISH!!

Ghost – It's only racist if directed against someone other than white BY somebody who is white. Therefore, paragons of virtue like Al Sharpton, barack hussein obama and Jessie Jackson (for example) could never be racists — and apparently neither can wetbacks (can I use that term?).

I don't think you'll find legions of masked Hispanic people marching into banks in Los Angeles wearing masks, or you'd see those same legions being carried out in bags and hoisted into the meat wagons – irrespective of their immigration status.

Lived in NY for years before moving to Texas, but I wasn't aware of that New York mask law?   Hmmmmm?   Somewhat OT, but I'd guess that pretty much rules out wearing the niqāb in NY, does it not?
.

And another Hot Air link! This is exciting. I love your blog. You do important work, the more people that know about you and your blog, the better. Same will Hillbuzz – get the word out!

@Martywd: I am a week shy from moving to NY to TX…I've heard that TX has gotten quite a few NY transplants as of late…Not too surprising, seeing that this state is going to hell in a handbasket. I can't be the only New Yorker wanting to swing the pendulum to the complete opposite side and see what life (and paychecks) are like under a sane, limited state govt!