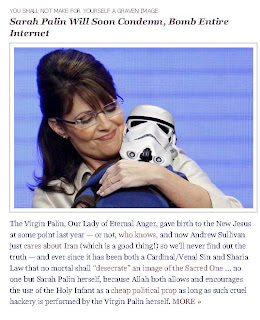 It really is hard to understand why some adults feel the need to make fun of Trig Palin, a one-year old who has Down Syndrome. Politics alone cannot explain it. If you don’t like Sarah Palin, fine, but why go after Trig?

The controversy regarding the Photoshop of Trig by Alaskan blogger Linda Biegel is only the tip of the iceberg. Ever since Sarah’s nomination, Trig has been a target. Last fall, the popular DC-based “gossip” website Wonkette joked how Trig must have wished he’d been aborted. Now Wonkette has taken Biegel’s Photoshop antics as an excuse to go after Trig anew.

In a recent post, Wonkette promoted and joked about even cruder Photoshops of Trig at the Something Awful web forum, where people can post anonymously (examples below). Wonkette even included one of these photoshops in its post (above right) while mocking Trig as the “New Jesus,” “Holy Infant” and “Sacred One.”

All the attacks on Trig are Sarah’s fault, according to the Wonkette post, since Sarah had the audacity to bring Trig on stage at the Republican National Convention (where the original photo in question was taken), which Wonkette calls using Trig as a “cheap political prop.” I guess that makes the Obama kids fair game according to Wonkette since they were brought on stage at the Democratic National Convention.

Sarah is to blame for all the new Photoshops of Trig, according to the Wonkette post, because Sarah complained about Biegel:

The Virgin Palin, Our Lady of Eternal Anger, gave birth to the New Jesus at some point last year — or not, who knows, and now Andrew Sullivan just cares about Iran (which is a good thing!) so we’ll never find out the truth — and ever since it has been both a Cardinal/Venial Sin and Sharia Law that no mortal shall “desecrate” an image of the Sacred One … no one but Sarah Palin herself, because Allah both allows and encourages the use of the Holy Infant as a cheap political prop as long as such cruel hackery is performed by the Virgin Palin herself.

Palin’s fury was such, when she found out some blog “on the Internet” had combined a picture of her cradling one of her Magic Babies together with a picture of her Jedi Master, some dingbat old radio talk-show clown in Alaska, that she did verily send her dumbest disciple, “Brother Meg,” to start a Jihad against the Entire Internet.

But we know what happens when a fear-and-anger crazed Snow Witch starts a vain war she can never hope to win: The Internet Strikes Back.

Which is to say, Palin basically poked a stick in the world’s largest beehive filled with cheap & tireless insanity, and the SomethingAwful.com goons have unleashed a pack of Photoshop Dogs From Hell to make the most incredible collection of Sarah Palin Desecration Images in the History of Time, the end.

Here are two of the milder Photoshops in the Something Awful forum which are Sarah’s fault according to Wonkette: 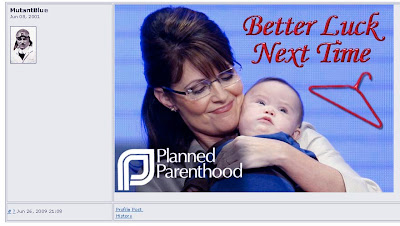 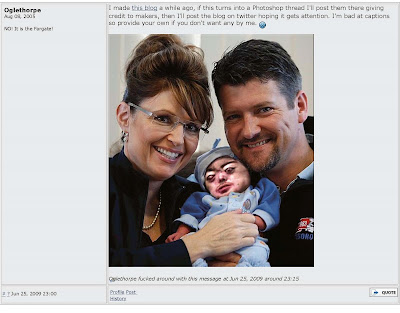 What a riot. It takes small people to stoop this low.

[Note: Accordingly to one of the commenters, the face imposed on the photo immediately above is that of a convicted sex offender, Brian Peppers, which makes that Photoshop particularly sick.]

And now, all of these people that you had heretofore never heard of are famous, because Sarah Palin wouldn’t let the stuff slide. Even dumber, she said that the photoshopping was a “desecration,” which means she believes Trig had been “divested of her sacred character.” Now I think Trig Palin is an awesome kid, but COME ON. That’s a really pretentious thing for a parent to say.

Can’t the Editors at Wonkette or bloggers at HuffPo check the dictionary? Desecrate has more than one meaning, and is not limited to someone being “divested” of “sacred character.” The Mirriam-Webster online dictionary includes “to treat disrespectfully, irreverently, or outrageously” in the definition of the term. Sounds right to me. More important, regardless of which words Sarah used, why does that justify attacks on Trig?

UPDATE No. 2: Check out my post It Always Has Been About Trig.

Boo fucking hoo. I would actually feel bad for Sarah if she wasn't so fucking desperate to become a celebrity; she brought this all on herself.

As for Trig, he won't know they're making fun of him – he's retarded, remember?

there is no doubt in my mind that the libtards who have posted here are in fact more retarded than the baby Trig Palin. Most of the comments are totally appalling and in my mind show the lack of moral ethics that exists amongst a younger generation that think themselves superior to others and seem to think that they can impugn others in such a disgusting fashion. The left-wing liberal meme is getting boring.

Trig has Down's Syndrome. This is something that is common amongst women over the age of 40 who have children (and not necessarily a first child). It happens because of a faulty chromosome. The child with Down's Syndrome might have other complications including heart problems. Some children are very close to normal, but others have more serious problems, just like children that are born without this faulty chromosome or gene. When these children are raised in a proper way and are not neglected they remain functional members of society. How do I know? I have had contact with several during my life. What I have seen is that when they are treated properly they are capable of taking direction and working like normal people – and they work harder than drug affected types.

These children are far better than those who blow their brains through taking drugs.

So shame on all of you. The least that you can do is learn about Down's Syndrome so that you too can learn and have a heart where others are concerned.

The internet is serious business. Calm down and think before you net-rage.

Palin-lovers are the most pathetic people I have yet to encounter. They're dumber than Trig, that's for sure.

There will soon be a change in the public's opinion of Governor Palin. Please read my latest post about the effect of the ongoing media criticism.