Why Are Iranians Using English On Protest Signs?

Why Are Iranians Using English On Protest Signs? 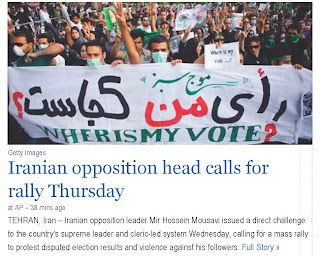 Barack Obama has come under criticism not only for his silence for several days, but also his failure to issue more forceful words of support for the protest movement in Iran.

Others counter that more forceful words of support would be counter productive, that there is no evidence the opposition movement wants U.S. support, and such conduct would create a bad image of U.S. meddling.

One thing that has struck me, though, is the photos of the protesters. Why are so many of them carrying signs and banners in English?

If the opposition movement didn’t care about world support, particularly from the U.S., why would they bother to use a foreign language on their banners? And of all the foreign languages to use, why English?

I think the protest movement has answered the question through their actions. While they may not want meddling (that is, us choosing their leaders for them), they do want our support in helping them obtain the leaders they have chosen.

It is becoming clear that the opposition in Iran understands that without world support, including from the U.S., they are doomed. Otherwise, they would keep their signs in Farsi and other domestic Iranian languages, and would not be Twittering and e-mailing people in the West

The Iranian regime also understands the importance of world support, which is why they have revoked visas for journalists, forbidden filming on the streets, and cut internet and cell-phone access.

Everyone seems to understand that this drama is being carried out not just on the streets, but also in world opinion. Everyone except for the Obama administration.

What doesn’t Obama understand about “Where Is My Vote?”

UPDATE: Juan Cole at Informed Comment reprints a report from someone at the Tehran rallies, confirming the increasing use of English on protest signs:

There are new signs as well. Written in English, “Where is My Vote?” …. Another: 2 x 2 = 24 million, a play on the bogus economic measures touted by Ahmadinejad during the debates, now updated to reflect the equally dubious election results.

Obama does not understand or care about "Where is my vote?" His proper points of comparison are Ahmadinejad and Chavez.

I've been saying that for days, so amen brother.

And here's a bonus question, and i don't know the answer to this one: when they aren't in english, are they in farsi or arabic?

if they are arabic, that suggests they are trying to reach out to everyone in the muslim world, too, since it is my understanding that many muslims learn arabic to be able to read the koran in its original language.

Why are so many of them carrying signs and banners in English?

Simple answer: Because many of them speak English. 🙂 It's also to gain world wide attention, but even advertisements throughout the Islamic world include English. You can go into the slums of Palestinian refugee camps and see billboards with English and Arabic. Unlike the western world where common knowledge of alphabets doesn't stretch beyond our Latin one, it's common for Muslims to know both the Arabic and Latin alphabets.

As for the difference between Farsi and Arabic, it's difficult to tell unless you've studied both languages. They both use the Arabic alphabet and are read from right to left. I can read a little Arabic, but even in the picture posted here, I can't tell.. I'm guessing Farsi because the Arabic word for where, aina, isn't present. But the first word there could be translated into the Arabic word for "I want" … My first guess is Farsi, but it's just a guess.

Barry understands completely. Which is why he is saying nothing. (ACORN)

Did a bit more digging on that sign, found a Farsi/English dictionary online.. It's in Farsi. Right to left, the first word is "vote," second is "my," and third is "where". Interesting sentence structure, placing the subject first rather than a verb or preposition, which is what Arabic would have done.