Will The Left Apologize To Bolton?

Will The Left Apologize To Bolton? 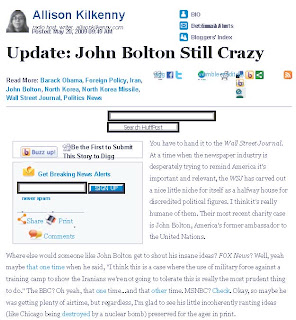 On May 20, 2009, John Bolton wrote an op-ed for The Wall Street Journal titled “Get Ready for Another North Korean Nuke Test” in which he noted that the complacency of the Obama administration about North Korea’s nuclear ambitions (and Iran’s) was misplaced:

“The curtain is about to rise again on the long-running nuclear tragicomedy, “North Korea Outwits the United States.” Despite Kim Jong Il’s explicit threats of another nuclear test, U.S. Special Envoy Stephen Bosworth said last week that the Obama administration is “relatively relaxed” and that “there is not a sense of crisis.” They’re certainly smiling in Pyongyang.”

As usual, the Left lashed out at Bolton, who may be third after George Bush and Dick Cheney in being portrayed as crazy and paranoid. Bolton has been derided as “the neocon’s neocon” who “laps up the hosannas of fellow knuckle-draggers.”

You have to hand it to the Wall Street Journal. At a time when the newspaper industry is desperately trying to remind America it’s important and relevant, the WSJ has carved out a nice little niche for itself as a halfway house for discredited political figures. I think it’s really humane of them. Their most recent charity case is John Bolton, America’s former ambassador to the United Nations….

Today, Bolton chose to growl at the old, but reliable, enemy of North Korea. This is a particularly vintage move when one considers North Korea already tried to strike fear into the hearts of Americans last month when they tested a missile that fizzled and fell into the ocean 1,300 miles off the east coast of Japan. Bolton’s stance is pretty brave because his frenzied ideology flies in the face of scholarly counsel.

Don’t take my word for it, read today’s headlines:

Which gets me to Iran. Here is what the Left is saying about the Iranian threat, the same psycho-political babble as Kilkenny, as in this guest-post, Break Out The NeoCon Fainting Couch, at Attackerman. The author argues that since Iran’s religious leaders have said nuclear weapons are bad, Iran’s military and intelligence leaders could not possibly want nuclear weapons:

The Supreme Leader [of Iran] can not get up and preach against the morality of nuclear weapons and call them “un-Islamic” and then wink and nod to his followers and have everything work out fine. One of the consequences of a theistic society is that the citizens follow the leader’s spiritual teachings for better or for worse. So how would they even find someone to work on a program that they have been taught will guarantee them a corner of Hell?

Let’s hope that the North Korean nuclear test is a wake up call for the Obama administration on Iran. So that we are not in a position of demanding another apology from left-wing bloggers when Iran detonates its nuclear device, or announces that it has constructed a device based on the North Korean testing.

UPDATE: Don Surber has a good round-up: Lefties on North Korea. And so does Troglopundit: If John Bolton writes a column predicting that I win a hundred million dollars, I’ll split it with him

UPDATE No. 2: There will be no apology. Quite the contrary, you should not believe your lying eyes when you read Kilkenny’s original post quoted above, at least if you read the new post North Korea’s Unsurprising Actions:

I apparently have to clarify an important point. No one should be entirely surprised that North Korea has detonated a bomb. Kim Jong Il launches a missile or detonates a bomb whenever he wants attention or aid from the United States. He tested a bomb back in 2006, and also launched a missile in April. The detonation of this latest bomb does not somehow de-crazy the rest of John Bolton’s Wall Street Journal column from last week in which he orders Obama to “put down Kim Jong Il’s script.” Whatever that means. One presumes he means to “get tough.” Whatever that means.

Oldwolves — you are missing the point of the removal entirely.

Perhaps my rhetoric was a bit much 😉

My core point is this, Bolton, at present, is simply an outlier from both liberal and conservative foreign policy views.

So, I deliberately meant to be provocative, but I want to engage in a debate (and perhaps learn) why Bolton’s views should be U.S. foreign policy considering how isolated he appears to be at present.

If Bolton has the correct view on N. Korea, Syrian, Iran and everyone else he suggests aggressive actions toward, then a lot of people owe him an apology.

In the interest of actual policy services rendered by Bolton, Bush 43 admins should be the first to apologize. Bolton himself freely acknowledges he lost the policy argument in the Bush 43 admin toward N. Korea (and other states).

I removed the word “left” b/c your diatribe is amazingly similar to both liberal and conservative diatribes about Bolton and neoconservative’s foreign policy.

The removal makes the statement ironically reusable and shows how little critique the statement contained as to why Bolton may be correct.

However, I acknowledge that was not your intent.

[
I’m sorry if I did not make that is not clear — I meant to push debate on Bolton’s policies, not get side-tracked on what I consider to be a strawman about “pure” “right” v. “left” foreign policy views.

For example, would it be fair to take Ron Paul’s view of foreign policy and consider it to encapsulate the position of the GOP/Right/Conservatives, even though Paul claims that his is the only “real” conservative position.

http://www.youtube.com/watch?v=V5_ThKD2g4U
(cite, in Paul’s own words)

Beyond the left’s brow-beating of Bolton, there are plenty of “plain” conservatives who are uninterested in neoconservative foreign policy as well and thus brow-beat Bolton from time to time. (Paul, as noted above)

Rather than actually defending Bolton’s record against both liberal, libertarian, conservative and the Bush 43 administration (or talk about the foreign policy reversals toward Iran and N.Korea during 43 2nd term), the author of the article has set up a series of weird _partisan_ strawman arguments.

The author’s framework, Bolton v. Left, includes Bolton in a way I don’t think is accurate.In foreign policy there seems to be this odd agreement between libertarians, plain old conservatives and plain old liberals. A “humble foreign policy,” similar to what candidate Bush 43 proposed. Thus, I found your statement quite interesting, with one word removed, directed at Bolton.

I find it much more interesting to talk about the following questions.

What Bolton’s strategy for dealing with N. Korea would be?

Why woudl that policy be superior to Bush 41, Clinton, Bush 43 dealings with N. Korea?

How Obama are (or should) deal with N. Korea?

However, in your response you’ve avoided how outcast the neoconservative foreign policy position is relative to both liberals and conservatives.

Whoa! I’m late to the party–sorry about that. Hey! Did any of you fine folks notice that Kilkenny never said Bolton was “crazy” for warning of another N.Korean nuke test? Y kant wingnutz reed?

You are late, and wrong. Here is what she said under her post that Bolton is still crazy: “And yet all of these facts couldn’t soothe the nerves of our mustachioed maverick, John Bolton. Get Ready for Another North Korean Nuke Test he hollers at the top of the page.”