MSNBC, Obama’s favorite network, reported on Obama’s trip with Joe Biden to get a burger. Just two wild and crazy guys out for some red meat. Andrea Mitchell (does she have nothing else to do?) reported that Obama ordered a burger and mustard. Sounds like it had that “real guy kind of quality.”

Mitchell even noted that Obama left a $5 tip in the tip jar. But she didn’t mention one arugula-like fact, and you couldn’t hear it on the MSNBC video because Andrea and her correspondent Kelly O’Donnel (they needed two people to cover this story) were talking so much.

Obama ordered his burger with DIJON MUSTARD! Bet he had to seek John Kerry’s counsel on that.

UPDATE: An official name: Dijongate. Burger, cheese, bacon and Grey Poupon mustard? That smells like a scandal to me.

UPDATE No. 2: The cover-up is getting deeper. Here is an MSNBC website version of the video in which they cut off the audio just before the mention of Dijon mustard. The Hell Burger theme of the coverage doesn’t sound so tough when it’s topped off with Grey Poupon:

UPDATE No. 3: There may be addictive behavior involved. Here is one of Obama’s favorite lunch recipes:

And here is the video proof. The One loves his Grey Poupon:

UPDATE No. 4: He ordered a cheddar cheese burger with Dijon Mustard on his first flight on Air Force One, and the mainstream media didn’t cover it. You know the sorry state of journalism when People Magazine is the only hard news coverage:

For President Barack Obama’s inaugural flight on Air Force One – taken and filmed when he was still president-elect – he was greeted by a pilot he called “straight out of central casting” and treated to dinner from a select menu.

His meal for the Chicago to Washington, D.C., flight? A medium-well cheeseburger with the fixings, and some fries, of course!

To further personalize his order, Obama requests Dijon mustard (yes, Grey Poupon is fine), lettuce, tomato and some salad or vegetables (in addition to the fries) on the side.

Here is the video proof (listen carefully beginning at 1:05):UPDATE No. 5: The conspiracy of silence on Obama’s allegience to Dijon Mustard goes way back. Remember, it’s the cover-up, not the crime:

In the summer of 1997, as he was finishing his first term in the Illinois State Senate, Barack Obama and a young legislative aide made an exploratory tour of downstate districts. When they stopped at a T.G.I. Friday’s, Obama ordered a cheeseburger, and when the waitress brought his food, he asked for Dijon mustard to go with it. “He doesn’t want Dijon,” the aide insisted, waving the waitress away, and shoving a bottle of French’s Obama’s way. The waitress was confused: “We got Dijon if you want it,” she said.

UPDATE No. 6: Dijongate is spreading like … well, you know. Ed Morrissey is on the case, arguing in favor of mayo (!!??). That’s ok as long as he’s not for Mao. And Urquhart at The Fray on Slate puts it all in perspective (something lost several updates ago) with some links to the originals:

Now I happen to agree with the President. American mustard is crap, and the spicy stuff is better. But this didn’t fit with the narrative of two wild’n’crazy guys going out for a couple of burgers. So they edited the offending condiment out of the report. To give a more flattering soft focus.

Shameless shills, the lot of them. They should be ashamed, except, y’know, they’re shameless.

It also gives me the opportunity to see if Artie’s still around, by linking to two fine Grey Poupon commercials, starring two of my favourite fictional Prime Ministers unbeknownst to American audiences, of course). Would you have any Grey Poupon? and Forward, Reverse.

UPDATE No. 7: It is interesting to watch how unhinged many nutroots blogs have gone over this post. One thing that seems to have gotten under their skin is the use of the Obama Hope poster theme for Grey Poupon. I’d like to claim I thought up the idea, but actually it was used by a very pro-Obama writer at Vanity Fair (to which I linked in Update No. 5): 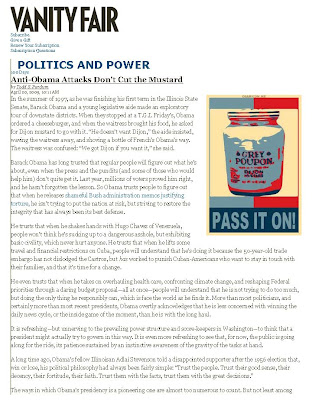 UPDATE No. 8: My French is very rusty, but I think this means the French are not happy: 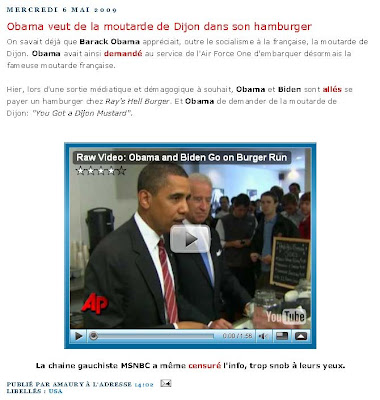 UPDATE No. 9: Mary Ann Akers at The Washington Post’s The Sleuth blog has noticed:

Cornell law school professor William Jacobson has been obsessively chronicling what he has dubbed “dijongate” on his blog. “Obama ordered his burger with DIJON MUSTARD! Bet he had to seek John Kerry’s counsel on that,” writes Jacobson.

He, too, notes the alleged cover-up by the mainstream media, noting that Mitchell “didn’t mention one arugula-like fact” – which was that Obama had the gall to ask for Dijon mustard. “You couldn’t hear it on the MSNBC video because Andrea and her correspondent Kelly O’Donnel (they needed two people to cover this story) were talking so much,” says Jacobson.

Why is this “non-story” taking on such a life of its own? If it is a non-story, why does anyone care?

UPDATE No. 10: All further updates will be through the related post, Thou Shall Not Mock Obama’s Mustard

I am laughing so hard at the righteous indignation of the Obama-lovers who’ve come to the rescue of their hero. How dare you mock his mustard choice AND insinuate that the MSM gives him preferential treatment, good sir?

Hyperbole – one of my favorite forms of comedy. The left, they just don’t get it.

What kind of man eats donuts with sprinkles.

After years of idiocy such as Freedom Fries and John Kerry’s supposed French looks, not to menion the secret Muslim/born in Kenya BS, jokes like this are hard to separate from actual Republican/Fox News talking points. The American right killed satire by outdoing it.

Ordering Dijon mustard isn’t a gaffe — it’s delicious, afterall, and if they’ve got it, why have French’s?

And what’s with Obama’s “Hey, how yo’ doin’ man? This is fer me an’ Bi — we got two we’re gonna eat here.” Jeez, he assumes the guy at the counter can’t appreciate intelligent grammar or diction. “Oh, lunch counter guy. Must Speak Down.” You never know these days. Maybe Mr. Lunch Counter Guy is an out of work liberal arts PhD.