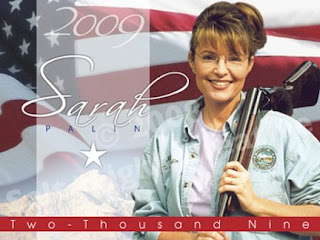 From the halls of social science, a theory: “Sex Appeal May Have Hurt Sarah Palin.”

“We hypothesize that focusing on a woman’s appearance will promote reduced perceptions of competence, and also, by virtue of construing the women as an “object,” perceptions of the woman as less human.”

I prefer this explanation, written from a male perspective:

Palin exudes sexual confidence and maternal authority, which in a relatively conservative culture like ours is the most recognizable and viscerally comprehensible form of female power. It makes a lot of men uncomfortable, but that’s because it’s the kind of female power they are most often subject to, and most often fail to successfully resist.

Or this, from a female perspective:

Conservative though she may be, I felt that Palin represented an explosion of a brand new style of muscular American feminism. At her startling debut on that day, she was combining male and female qualities in ways that I have never seen before. And she was somehow able to seem simultaneously reassuringly traditional and gung-ho futurist. In terms of redefining the persona for female authority and leadership, Palin has made the biggest step forward in feminism since Madonna channeled the dominatrix persona of high-glam Marlene Dietrich and rammed pro-sex, pro-beauty feminism down the throats of the prissy, victim-mongering, philistine feminist establishment.

Sarah’s persona — her good looks, her America-is-great attitude, her happy marriage — was a threat to many in the Democratic / liberal / academic / women’s movement world at many different levels. You don’t need to be a freaking social scientist to figure that out.

Regardless, a good excuse to run a picture of Sarah.

Another thought on Sarah.
She is not a threat to woman or man. For those of you who have commented that she is a threat you are the one with a problem. No one can indimidate you unless you let yourself be indimidated. If she is a threat to you then you are jealous. People who look at others as a threat need to get thier life in order. Sorry you are not bright enough to keep up. Liberals are holding the had of Satin and don't even know it. You can not be a Christian and be a libera. Conflict of intrest.
Nope your are wrong. I am Jewish. I go to confession before I tell the Rabi

RonClark says: "…Piper is fortunate enough to have a family with the resouces to provide for her and her child…"

It was Bristol who was pregnant and had an out-of-wedlock baby.

Try to get your facts in order before ranting. This kind of mindless error just destroys whatever credibility you brought to the site. Now I question the accuracy of anything you say. RonClark says the sun rises in the east? I'll want independent corroboration.