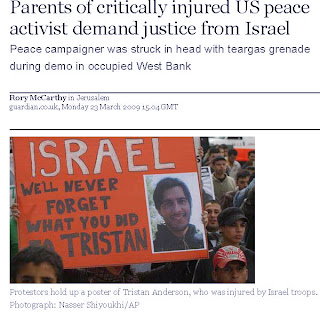 Tristan Anderson was seriously injured earlier this month while participating in violent protests against the security barrier built by Israel in response to a wave of suicide bombers from the West Bank:

Every Friday for the past seven months, the villagers of Nilin, bolstered by foreign volunteers from the pro-Palestinian International Solidarity Movement and some Israeli far-leftists and anarchists, have protested against the expansion of Israel’s separation barrier here. Now under construction, it is one of the final sections to be completed in this area west of Ramallah in the West Bank.

The protests inevitably end in violent clashes. The Friday before, an American activist, Tristan Anderson, 38, from Oakland, Calif., was struck in the forehead by a heavy, rubber-coated tear-gas canister fired from at least 300 yards away. He was standing in another picturesque orchard dotted with gravestones next to the village mosque at the time. He remains in serious condition in an Israeli hospital in Tel Aviv.

Anderson is a long-time internationalist who has participated in the types of aggressive, sometimes violent, protests that put him in harms way, including spending the better part of two years sitting in a tree, other violent protests, and putting his body under a bus. I hope Anderson recovers, so that he can go on protesting, even though I disagree with him politically.

Just weeks before Anderson’s injury, an unnamed American student who was studying in Jerusalem was the victim of a knife attack by several Jerusalem-area Arabs:

[T]he four men attacked the American student as he was walking through the forest and tried to drag him to a secluded area. The student resisted, and [one of the men] then tried to slit his throat. The attackers proceeded to push the student to the ground and beat him.

[One of the men], the indictment said, tried once again to slit the student’s throat, but instead cut him across the right check. The men then fled the scene.

The bleeding student managed to make his way to Silwan, and then walked another 40 minutes to the Old City’s Dung Gate, from which he was rushed to the Shaare Zedek Medical Center.

The American student, by contrast, suffered mostly in silence, with only a few reports in the Israeli press. While the student’s injuries were less serious than Anderson’s, that is not the reason for the relative silence. The student served no one’s propaganda purposes, so no one has an interest in hyping the attack.