Posted by William A. Jacobson Tuesday, February 3, 2009 at 08:51am 0 Comments
More Sharing Options 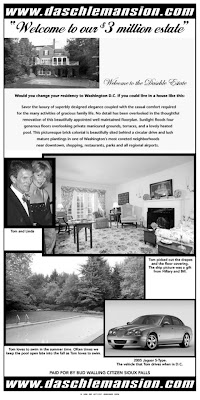 In the current controversy regarding Tom Daschle’s failure to report income (and thereby evade the taxes on that income), Daschle has portrayed himself as the most honest person in America, who always intended to pay all the taxes he owes, and who simply made an honest mistake. But history shows that this is not the first time Daschle has dodged taxes, raising even more questions about Daschle’s veracity and fitness for office.

In 2004, during his failed re-election campaign, it was revealed that Daschle claimed a property-tax homestead exemption for his $1.9 million Washington, D.C. mansion (photo). The problem was that in order to claim the tax exemption, Daschle had to certify under penalty of perjury that the mansion was his primary residence. Daschle did so, and got the tax exemption, but there was a problem. Daschle had voted in South Dakota, the state he represented, by absentee ballot, listing a South Dakota address as his primary residence. South Dakota primary residency also was a requirement of Daschle running for office. When the homestead issue surfaced, accusations were made that Daschle or someone on his behalf altered the records to make it appear that only Daschle’s wife has applied for the exemption.

Daschle’s opponent, now Senator John Thune, made an issue of this tax dodge in the campaign, and Daschle was defeated.

Who would ever thought by the way, that the leader of the Democratic party would be such a fanatic about tax avoidance? South Dakota has no income tax and D.C. is a tax hell. This tax-happy senator saves thousands of dollars every year on his income taxes by filing as a South Dakotan.

And apparently Linda is no slouch in this tax-minimization game either. In fact this whole mini-scandal that has snagged the Daschle’s by the pants legs, was all caused by an attempt by the Daschles to save a few measly thousand dollars on their D.C. property taxes. The irony here is so thick you can taste it. Daschle fights like a pit bull every year to prevent tax cuts for working-class folks, like South Dakota farmers, who could save a few thousand dollars on their taxes thanks to the Bush tax cut. But there’s no limit to the steps he will take to avoid paying taxes himself. Daschle was telling the truth when he claimed he was for tax relief: Tax relief for the Daschle family, that is.

I guess, fundamentally the Daschles agrees with Leona Helmsley: Taxes are for the little people to pay.