Elkhart’s Problems Not What They Seem, And Obama Won’t Help

Elkhart’s Problems Not What They Seem, And Obama Won’t Help 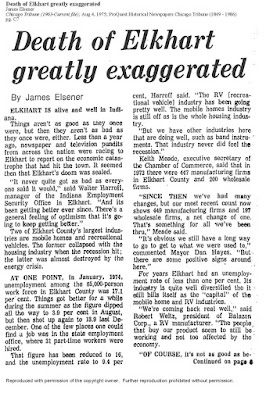 At his press conference last night, Barack Obama singled out Elkhart, Indiana, as a place of special gloom and doom:

I took a trip to Elkhart, Indiana, today. Elkhart is a place that has lost jobs faster than anywhere else in America. In one year, the unemployment rate went from 4.7 percent to 15.3 percent. Companies that have sustained this community for years are shedding jobs at an alarming speed, and the people who’ve lost them have no idea what to do or who to turn to.

I didn’t know much about Elkhart, and why it had an unemployment rate roughly double the national rate. Was it the result of Bush administration policies, or something more fundamentally wrong with the structure of Elkhart’s economy? The answer was easy to find: Elkhart’s economy is too dependent on RV manufacturing, which historically suffers disproportionate losses in weak economic times.

Looking behind the unemployment numbers, it appears that the current spike is related to “the loss of recreational vehicle manufacturing jobs.” In fact, Elkhart county calls itself “The RV Capital” with 107 manufacturers making one of every two RVs. Not surprisingly, Elkhart is home to the RV Hall of Fame.

In a weak economy, sales of RVs suffer disproportionately, due to the high cost of purchase and the high cost of gas to run them. The RV industry is a primary beneficiary of “trickle down” economics in which people who can afford to spend tens or hundreds of thousands of dollars on an RV create manufacturing jobs. This leads to a boom and bust economy.

The RV industry, and Elkhart, goes through ups and downs along with the economy. In a 2005 interview, Dave Humphreys, then president of the Recreation Vehicle Industry Association, pointed out the cyclical nature of RV sales: “The business has always been cyclical, but at times has had especially deep troughs, such as in 1973-74 and 1979-80.” Humphreys went on to express concern that 2004 may represent a peak:

“Most people know that we had the best year in 26 years in 2004,” says Humphreys of the RVIA. “What’s not widely known is, is this a fluke?” Indeed, the long-term viability of the RV business is a matter of great importance to the Hoosier state. If the industry hit a sudden, deep slump, Humphreys says, “the economic impact on Indiana would be very negative.”

During the Clinton recession in 2000, Elkhart was hit hard:

The recession knocked on Elkhart’s door a little more than a year ago. “You had this company saying they were going to lay off 30 people and that company saying they would lay off 40. Then you would hear about another 50 or 60 jobs gone,” said Jerry Quatman, president of the United Way of Elkhart County. “It’s been a gradual thing.”

Two years ago, union workers in Elkhart went on strike because they were being forced to work too much overtime. Today, they are lucky to log 30 hours on their weekly time cards, if they can find work at all.

This is not the first time Elkhart has been hit hard due to its reliance on the RV industry. In 1980-82, the unemployment rate reached over 13%. In the mid-1970s, people predicted the “death” of Elkhart due to the spike in gas prices as a result of the Arab oil embargo. The Chicago Tribune reported on August 4, 1975, that in January 1974 the unemployment rate in Elkhart was 17.1%, dropping to 3.9% by mid-year, then jumped again by year-end to 13.9%.

The point is not to diminish the problems faced by unemployed workers today in Elkhart, but to understand that the cause is a local economy dependent on the economically sensitive RV industry. It’s been that way in Elkhart for several decades.

If Elkhart banks its future on the RV industry, then Obama’s plans will cause more pain; targeting the “rich” for higher taxes means less money to purchase RVs. Restricting oil drilling and taxing gasoline-using conduct in the name of lessening global warming means fewer people using RVs. Infrastructure projects won’t change this dynamic, because once the projects are over, there still won’t be jobs. The answers for Elkhart seem to be diversification of the local economy, and a growing national economy in which people keep more of their income and RV use is not punished. The “stimulus” plan and Obama’s economic policies will make things worse, not better.

I thought the choice of Elkhart and Fort Meyers interesting. Both places driven by boomers: Elkhart of RVs, and Ft Meyers with boomers buying second homes (and often a third to flip in a year or so). With Grandma living in an RV Park near Ft Meyers I got a first hand look at growth that wasn’t going to be sustainable. Not exactly a grapes of wrath tail here either. Not sure why I should be bailing out some of these speculators with their mortgages.